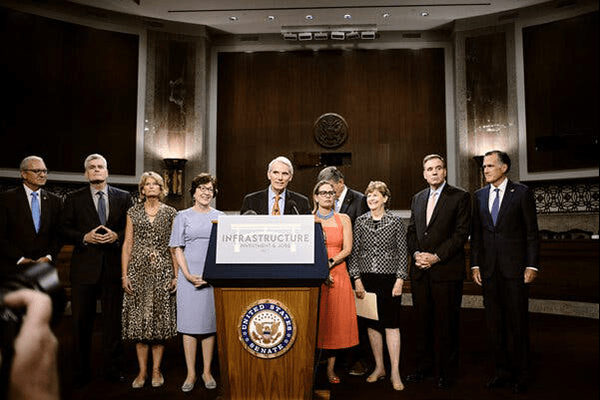 Infusion Of Funds Could Put Gateway Program On Track

The United States Senate last week passed a $1.2 trillion infrastructure package, the largest upgrade to the country’s roads, bridges, pipes, ports and broadband in decades. Rockland County is hoping to cash in on this historic spending bill.

The package contains $550 billion in new investments, including funds for electric car charging stations and zero-emission school buses. The spending is mostly paid for without raising taxes. Most of the funding comes from repurposing unspent coronavirus relief money and tightening enforcement on reporting gains from cryptocurrency investments.

The bill would add about $256 billion to the debt, according to the Congressional Budget Office.

In a refreshing change of pace in national politics, the plan garnered significant support from both Democrats and Republicans in the Senate, but there are still a few steps to go before it becomes law. It must also pass the House of Representatives, where tweaks are expected. Then the House and Senate will hash out their differences before sending a final bill to President Biden.

Meanwhile, movement on the bill could have a positive impact on Rockland County and the Hudson Valley region.

“We are pleased to see that the Senate Infrastructure Investment and Jobs Act passed last week will provide funding for projects like the Gateway Program, the completion of which is vital to Rockland County and the economic well-being of the NY Metro region,” said County Executive Ed Day. “As the most historically underserved county in our region, this kind of investment in transit and infrastructure improvements is exactly what Rockland County needs. I urge State transportation officials in NY and NJ to prioritize Gateway to receive a significant allocation of these infrastructure and transit funds.”

The Gateway Program, including a new set of Hudson River passenger rail tunnels, could provide for a future one-seat rail ride from Rockland to Manhattan. “Gateway could benefit from the Senate bill’s funding allocated to the Federal Transit Administration’s capital investment program, as well as the $16 billion set aside for major projects deemed to provide substantial economic benefit and the $30 billion earmarked for Amtrak’s Northeast Corridor,” said Day.

“Rockland County, like so many communities across our country, is in need of bold investment to bring our infrastructure into the 21st century,” said Congressman Mondaire Jones (D-NY). “From improvements to our roads and bridges to investments in human infrastructure like child care and Medicare expansion, the bipartisan infrastructure deal and the $3.5 trillion reconciliation package will together be transformative for our district by creating jobs, stimulating our economy, and ensuring Rockland remains a world-class place to work and live for decades to come.”

Mondaire has said commuter rail must be an important part of the conversation.

Rockland residents commuting to New York City by train must take New Jersey transit to the Secaucus Junction Station, and then transfer to a different train to get to Penn Station. Jones argued that this is “deeply inconvenient” and makes Rockland less appealing for working families.

The congressman argued that the one-seat ride to New York City has  helped Westchester County flourish, and stated Rockland’s need for the same service.

The bipartisan bill is a lot less than the $2.3 trillion Biden initially asked for in the spring, but it is still a significant amount of funding for the next five years. The largest ticket item in the bill is money for building and repairing roads and bridges across the country.

America’s passenger rail system also receives a large chunk of funding for upgrades and maintenance. There is substantial funding earmarked for the Northeast Corridor, the heavily traveled route from Boston to D.C.

The bill aims to address the Transportation Department’s estimate that 40 percent of buses and 23 percent of subway and rail cars are in bad condition. The funding would go a long way toward upgrades. There is also money for new bus routes and making public transit more accessible to seniors and Americans with disabilities.

There is a major focus in the bill on expanding broadband in rural areas and low-income communities. There is a renewed focus on upgrading America’s water infrastructure. The bill includes $15 billion specifically for lead pipe replacement. There is also $10 billion to clean up man-made chemicals known as per- and polyfluoroalkyl substances.