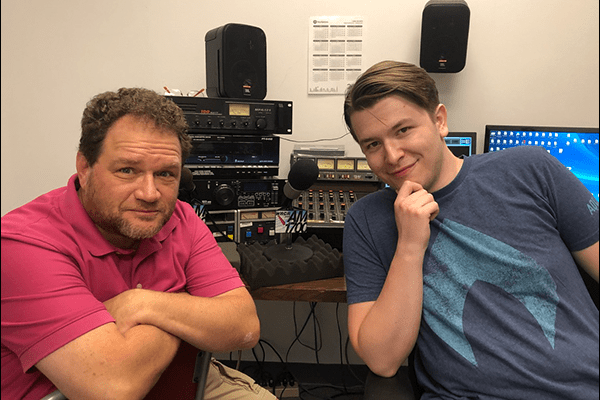 He’s Young and Fiery But Has Big Shoes To Fill. Meet Will Hennessey

He has a sonorous voice and fire in the belly, but he’s got big shoes to fill. On Monday, Will Hennessey, 22, will become the new voice that listeners hear when they tune in to WRCR AM 1700 for their morning news.

“I realize there will be a steep learning curve,” said Hennessey, referring to being both the board operator and the co-host of Jeff & Will In The Morning, a 6 to 10 am news and talk show segment. “I expect we’ll hear a lot more from Jeff. He has a lot of experience.”

On Aug. 13, Steve Possell, 72, hung up his headphones and mic after a 20-year stint at the station and half a century in the business, and passed the baton.

“It’s time,” said Possell recently told RCBJ. Possell has been the voice that has guided us through hurricanes, power outages, snow days and every day. He is an icon.

“Will brings a new perspective to the program and complements Jeff’s experience in the media and as a Rockland County resident,” said Kerry Potter, Director of Business Development. “While Steve Possell is irreplaceable, Will helps bring the show in a new direction while honoring its legacy in the community.”

Hennessey, young and energetic, knows it will be a tough act to follow. Smartly, he says the key to following in the steps of a giant is to listen and learn. In fact, listening and learning is exactly how Hennessy groomed himself to become a radio host. Hennessy credits his parents for imbuing him with a love of radio.

“My parents grew up around radio in the sixties,” said Hennessey. “Radio was huge in our house. My parents were tuned into the radio scene. I’ve been listening to radio since I was a child.”

But in particular, Hennessey recalls the ride to school every day.

“Mom drove us to school instead of riding the bus,” he said. “We would listen to shows with co-hosts and it became a dream of mine to fill a role like that one day at a station.”

The new hire, a recent graduate of New Paltz University, is about to see what it feels like when dreams come true. Hennessey and his fiancé and their two pups live in Newburgh. The new radio host grew up in Walkill in Orange County in a family of five children. During college, Hennessey focused on theater and audio engineering. He’s had a lifelong curiosity about audio equipment and a deep interest in the intersection of the functioning of radio studios and the live environment of talk shows.

“The thrill of radio is that you have to handle things on the fly,” Hennessey said. “It’s a bit like improv.”

In addition to radio, Hennessey is building a voice-over career. He has done spots on commercials and for film.

“All those years listening to 101.5 really planted the seed,” said Hennessey. “I did a lot of bonding with my mother listening to those shows. It taught me a lot about the world, both locally and nationally. I was only a kid, but I learned a lot of real stuff as opposed to 4-squared in algebra.”

Hennessey is excited to take up the microphone at WRCR but he says he’ll be relying heavily on his co-host Jeff Lewis, who is well versed in Rockland affairs. The newcomer understands the local station morning show depends heavily on being conversant on the many local issues residents like to wax poetic about.

“The Morning Show will always be a place where the community can gather, learn a few things, teach a few things, be entertained, and help others in the community, all while having some fun talking to and with each other,” said Jeff Lewis, Morning Show co-host and WRCR’s News Director. “We’ll still provide access to local lawmakers, community groups and other listeners without the coarse debate and anger found so frequently in social media.”

“I know Steve had a very wide fanbase in the community,” Hennessey said. “I recognize it will take a lot for the audience to get used to a new host. It’s a tough spot. A little bit nerve-wracking, but also very exciting. I can’t wait to step into this role, to get to know everyone.”

Hennessey, who plans to be married in June 2022, says he’s looking to move to Rockland County. He’s also hoping his youthfulness will invite younger listeners to tune in. WRCR’s audience skews to an older audience. The morning host says millennials view streaming services as their source of news and music, but radio should also be on their radar.

At home in Walkill, Hennessey’s mom Merle still had the radio under the kitchen cabinet. She’s relies on familiar voices bring the world to her.

“My mother would tell me, when I was young, and we’d listen to talk shows, ‘you could do that,’ he said. “Now she’s enthralled. When I told her I got the job, there was a lot of screaming. A lot of affirmation. She saw my potential early on. She said she knew I’d get to this point in my career.”