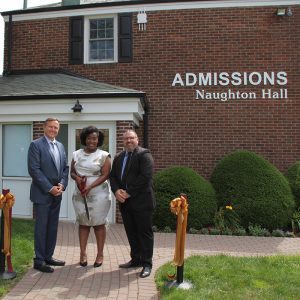 Daly, who made investment and growth for the college a top priority, said “It is hard to believe that it has been one year to the day since I began my tenure as the new President of St. Thomas Aquinas College — and what a year it has been! Throughout the year, we not only navigated COVID challenges, but we also provided “access to an affordable education” for all students. We put several strategic pillars in place and made strategic investments — such as our new Admissions Office, which we officially opened today — to position the College for growth in the future.”

Naughton Hall, situated at the head of the campus at the Borelli Hall gate, previously housed faculty offices. The building has undergone interior renovation including new modern furniture and video conferencing technology to facilitate presentations.  Some of the building will be used for office space for the admissions team and include an area to host/start tours and provide light refreshments for visitors.

The Admissions Center will host high school groups, guidance counselor events, and on campus meetings for anyone in the STAC Community who needs a multifunctional space.

St. Thomas Aquinas College is an independent liberal arts college located on 72 acres in Rockland County, NY, which provides education at the undergraduate and graduate levels.

Residential home sales in the lower Hudson Valley for the second quarter of 2021 continued a remarkable recovery from the depths of the Covid-19 crisis a year ago, with every county in the market serviced by OneKey MLS demonstrating strong gains both in the number of sales as well as increased median sales prices. 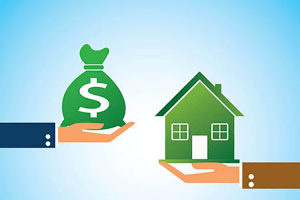 While not considered a suburb, sales in Bronx County increased 101.7 percent at 599 units sold compared to 297 units in the second quarter of 2020.

Sales of condominium units increased in in all counties (except Sullivan) and co-op sales in Westchester and Bronx counties continued to surge. Co-op sales have been lagging in both counties for the past year but rebounded in Q1, 2021. It is likely that this rebound can be attributed to the dearth of choices in other housing types as well as the fact that co-ops remain an affordable alternative, at a median sale price of $190,000 (identical to the median co-op price in the 2nd quarter of 2020) in Westchester County and $230,000 in Bronx County, for first time buyers and other potential purchasers unable to afford rising single family home prices.

While the housing market continues to be plagued by lack of inventory, it is still supported by low interest rates and an economy and job market which is surging as a result of Federal stimulus monies which were pumped into the economy over the last year.

While the lower Hudson Valley markets may have initially benefited by Manhattan residents departing the city for the suburbs, (a trend which may well have been over-stated) the New York City residential market is also showing signs of a strong recovery. It could be argued that the increased sales numbers throughout the New York City and greater suburban area are the result of the pandemic accelerating the natural migration of home-owners who might otherwise have delayed home purchasing and selling decisions. The same questions about the sustainability of the current market continue to exist, especially with rising prices. However, with the economic recovery in full swing, it appears that the housing market should remain strong for the balance of 2021.

The New York State Index of Consumer Sentiment stands at 83.7, up 1.2 points from the last measurement in the first quarter of 2021, according to the latest poll by the Siena College Research Institute

New York’s overall Index of Consumer Sentiment is 1.8 points below the nation’s* Index of 85.5. The overall and future indexes for New York each increased this quarter and remain above the breakeven point at which optimism and pessimism balance. The current index also increased and is at breakeven. The overall and future national indexes increased but New Yorkers continue to be more optimistic about future economic conditions than the nation as a whole. The current national index fell 4.4 points.

Consumer sentiment continued to climb this quarter driven by increases in New York City, among Democrats and as the state’s lowest income bracket residents start to see light at the end of their economic tunnel. Overall, New York is up 17 points from the initial COVID shock as belief in a better tomorrow is now nearly as strong as it was before the pandemic.

Upstate isn’t moving towards “Happy Days” as quickly as NYC but outside of the city the future looks brighter than it did in March 2020. Demand for major consumer goods is very robust up 20 percent over March 2020 for cars, 31 percent for furniture and 82 percent for home improvements. But, as concern over the impact of gas now exceeds 50 percent and approaches two thirds for food, price increases, or inflation, could slow this recovery,” according to Dr. Doug Lonnstrom, professor of statistics and finance at Siena College and SCRI Founding Director.