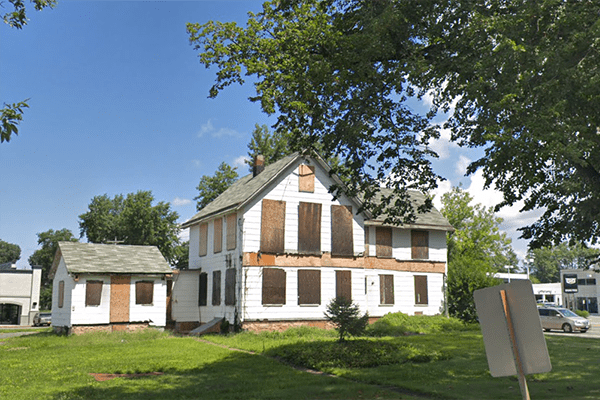 An application brewing for more than two years is ready is ready to be heard.

A local developer proposing to build a Starbucks on the corner of West Nyack Road and Route 304 in Nanuet will be asking for a raft of variances when it comes before the Clarkstown Zoning Board of Appeals next Monday.

The half-acre site is located in a zone that permits light industrial and office uses (LIO) but not restaurants. The deal is contingent on obtaining zoning approvals for the site.

The applicant, KD Equities, needs a zoning variance to site a food use. Previous onsite uses included a gas station and the Clarkstown Police Department. The applicant is also seeking several variances for lot size, setbacks, and signage.

The half-acre site where local developer John Magee wants to build the Starbucks has a dilapidated 1825 wood-frame historic house that has been sitting vacant for years. The house and outbuildings would be demolished. The property has been listed “for lease” for almost two decades.

KD Equities, owned in part by local developer John Magee, has entered into a ten-year lease with Starbucks Corporation contingent on the granting of the proposed variances, according to the applicant’s presentation. The applicant states “KD Equities does not have the funds to pay for this property, and SF Properties (the former owner) has been paying the property taxes.”

In seeking a use variance, KD Equities will argue the lot size (23,000 square feet) is practically inadequate for an LIO zone, which requires a minimum of 100,000 square feet, and that it has been difficult to attract industrial users to that location. The property is close to retail, car dealerships, and a bakery.

Surrounding the parcel to the north and the west is the former 10-acre site where Swivelier Lighting once assembled, manufactured, warehoused and distributed lighting fixtures from 1956 to 1997.

KD Equities (at the same address and related to SF Properties) owns the Starbucks parcel.

SwivelierOver the years, Swivelier discharged wastewater, cooling water and non-contact process water, through a floor drain and into a drainage ditch on the western portion of the property.

For 16 years, SF has been remediating the contaminated site, which was also fouled by elevated levels of chlorinated VOCs (volatile organic compounds) that pooled beneath the floor slabs. In 2018, SF completed the voluntary environmental cleanup that was overseen by the New York State Department of Environmental Conservation.

As part of the cleanup agreement, SF entered into a restrictive covenant that runs with the land restricting the parcel to commercial or industrial uses, and specifically excludes daycare, childcare, or medical uses.

The covenant was signed March 28th, 2018. At the time, the DEC noted that the use of the then-current tenants was acceptable under the covenant. These tenants likely signed leases prior to the recording of the covenant.

The proposed Starbucks site, while surrounded by the former Swivelier factory site, is a separate parcel, and is not subject to the restrictions imposed by the covenant.

There are two Starbucks in Nanuet: one at Rockland Plaza, the other at the Shops at Nanuet.