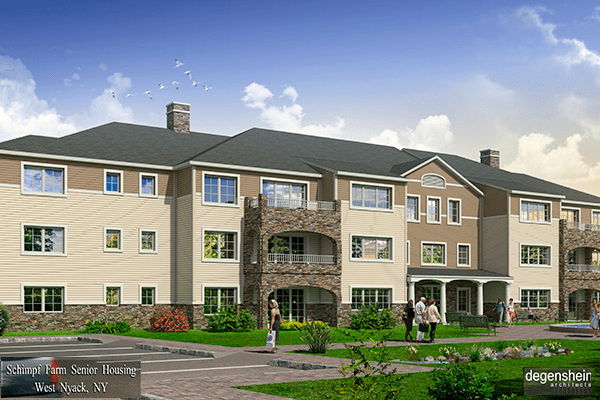 NOTE: The Schimpf Farm application has been rescheduled for July 28

Buckle up! It’s going to be a long ride at the Clarkstown Planning Board meeting Wednesday evening when board members will consider two projects: a controversial proposal to build a senior housing complex on Schimpf Farm and an upgrade to Suez’s water treatment plant on the banks of Lake DeForest.

In December, the Clarkstown Planning Board granted preliminary approval for a special permit to a developer who wants to build a senior housing complex on the former Schimpf Farm in West Nyack despite concerns from neighboring residents and members of the Rockland County Department of Planning. The vote was 6-1 in favor of the special permit.

The applicant is seeking a special permit to build a senior housing development on the 8.5-acre, R-22 zoned land on the former Schimpf Farm site, located on the southeast corner of Parrott Road and Germonds Road. The project calls for an approximately 169,000 square foot senior housing complex with 127 units of 55-plus senior housing, a 5,500 square foot clubhouse, and 216 parking spaces. The plan also includes patios and barbeque areas, a community garden, and walking paths throughout the site.

The proposal, pending before the town since 2014 in a series of iterations, consultations with the town’s Technical Advisory Committee, and the Planning Board, was presented with “significant changes based on input from the public,” according to Ira Emanuel, legal counsel for the project’s applicant, Jay Theise of Jakla Construction Corp. (Western LLC).

The applicant did not need any variances or planning board waivers.

The site is zoned R-22, or single-family housing. However, in 2014, Clarkstown amended its zoning code to allow for a total of 700 units of senior citizen housing town-wide, subject to a raft of conditions including that development does not cause traffic congestion, does not adversely affect the character of, or property values in the area, and that it does not negatively impact water supply, waste disposal, or any other public health and safety issues. Town planner Joe Simoes said roughly 300 units of senior citizen housing have been spoken for with Vincent Village and Atria.

Clarkstown, in its last Comprehensive Plan, has identified the Schimpf parcel as an ideal site for senior housing.

Several residents, including CUPON, have spoken out against the project, voicing objection to its scope, density, and the likelihood of causing additional traffic headaches on Germonds and Parrott Roads.

The proposal is seeking final site plan approval to upgrade its existing 22,785-square-foot water treatment plant with an expansion that includes a new transfer pump station, two above-ground storage tanks, and a raft of water treatment equipment. Each storage tank will have a capacity of 1.1 million gallons.

Suez seeks to upgrade aging infrastructure at the water treatment plant to address water quality challenges. Raw water quality has been affected by road salt, fertilizers, and other contaminants. SUEZ has achieved some success in addressing these water quality issues with temporary solutions, including use of copper-based lake treatment chemicals.

The 20 million gallon per day (mgd) water treatment plant, along with 61 groundwater wells, serves a population of approximately 300,000 in Rockland County.

The original water treatment plant was constructed with 48-inch/30-inch raw water main from the intake building to the existing aerator. In the 1970s, new raw water pumps, chemical additions, filter equipment and two new high service pumps were added. In the 1990s, a raw water pump was added to the site. Construction of a dissolved air floatation pre-treatment process to replace the aerator and convention flocculation/sedimentation process were completed in the mid-2000s. A supplemental standby power generation was added in the late 2000s.