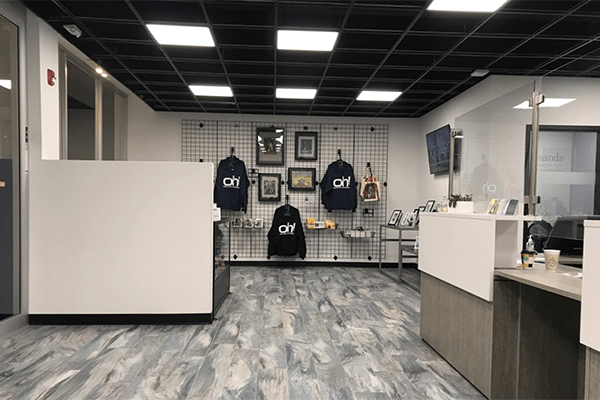 Walt Nygard has turned his experience as a war veteran into art. He is studio manager at Frontline Paper, which produces paper made from scraps of U.S. military uniforms. His artwork, on display in galleries, has been seen by bigwigs including Michelle Obama, Dr. Jill Biden, and Prince Harry. Now, the veteran is making paper from medical scrubs to honor frontline workers.

Max J. Ash struggles with dyslexia. But he’s also an emerging entrepreneur who created the The Mug With A Hoop® in 2nd grade. The mug caught on, and today he serves as Chief Creator of MAX’IS Creations, which has sold more than 140,000 mugs.

The inspirations of these creators and others will be showcased when BRIDGES opens the Independence Café-A Unique Boutique retail concept on July 1st. The boutique, which will feature works and products of people with disabilities and veterans, will be located inside the organization’s welcome center on the second floor at the Palisades Center in West Nyack.

The selection of crafts – some made by people with disabilities, some for people with disabilities – is designed to market unique objects in a retail setting, in some cases for the first time. The boutique, which was part of the plan when BRIDGES relocated to the Palisades Center, will occupy 400 square feet, and be manned by BRIDGES’s staff.

“We want to highlight entrepreneurs with disabilities without them having to carry the burden of renting space in a kiosk in the mall or in a store,” said Carlos Martinez, executive director of BRIDGES. “We want to bring attention to their inventions, designs and inspirational art.”

To debut, there will be around 20 vendors selling attire, books, soaps, bags, jewelry, candles and jelly jars. The organization found its vendors via social media, among its community, and from people who’ve reached out to participate.

Martinez said the boutique would operate on a consignment model, though the percentage BRIDGES plans to take will be less than 25 percent, depending on the vendor and the product. Most consignment shops operate on much higher margins – ranging from a 30 percent to 60 percent cut on a sale.

Most of the vendors are people with disabilities, “seen and unseen,” explains Martinez. Others are makers of products that help this population. For example, Danielle Ezzard, owner, of Savon Aromatique, suffered a severe neck, back, and shoulder injury in 2007 which left her disabled and unable to work. Savon Aromatique as a way to treat Danielle’s sensitive skin, and has since grown into a company handmade soaps, hand sanitizers, and bath products all made from natural ingredients.

The boutique will also sell coffee and candy and jellies, but it is not focused on food.

“We can’t compete with 7-11,” said Martinez, which is a nearby mall neighbor.

The name “Independence Café” derives from BRIDGES efforts to utilize the talents of veterans and those with disabilities.

BRIDGES is also underway with a second Independence Cafe in Rockland County’s government Building A in Pomona. And the nonprofit organization is looking for two additional locations for its grab-and-go model.

“We are potentially looking at a library and possibly a location in Spring Valley,” said Martinez. “We are in a lot of conversations, but we’re excited to expand the brand to give more people opportunities to be in the workforce.”