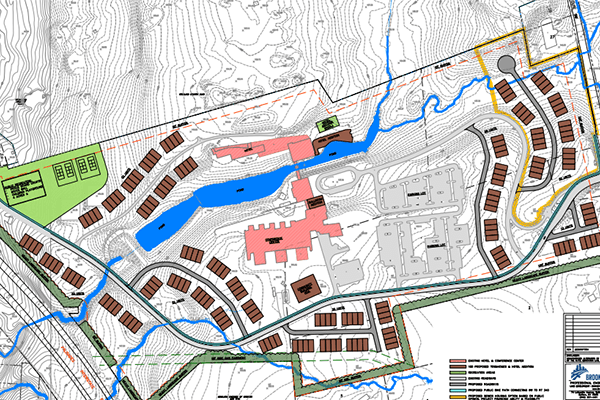 The Town of Orangetown board members on Tuesday effectively disqualified one of three developers and his team from the contest to redevelop the HNA Palisades Training site despite extending an invitation to a scheduled meeting on Wednesday to lay out plans and share financial information.

Following a coordinated attack from a group of Palisades residents on Billy Procida’s plan to resurrect the hotel and build 180 townhouses, and on his character, board members indicated they would not put their support behind his proposal.

“Plans one and two are awesome,” said board member Tom Diviny. “Number three – I would never vote for it.”

Plans “one and two” are a reference to the other two proposals that nearly 20 residents praised during the public hearing. Orangetown, in cooperation with HNA, is seeking a developer to purchase and reimagine the 106-acre site at 334 Route 9W to keep the site on the tax rolls and make it relevant and accessible to the community.

Supervisor Teresa Kenny said on Tuesday that Procida’s presentation was “inappropriate” adding that she had to “reach out to HNA to apologize.” Though she did not specify what she was apologizing for, sources say the Supervisor was peeved over Procida’s allegation that HNA is in bankruptcy.

Paul Valentine echoed the sentiment of Kenny and Diviny, saying Procida’s presentation was “a sales pitch rather than a plan for the property.” He called it “insulting.”

And board member Jerry Botari, who said he was speaking on behalf of himself and absent board member Dennis Troy, said he agreed with the board.

“We are working to preserve Orangetown,” said Botari. “I won’t even speak about plan three.”

“Plans one and two are awesome,” said board member Tom Diviny. “Number three – I would never vote for it.”

Procida was not at Tuesday’s meeting.

“The council should have said ‘we have no comment on this, we have not yet met with the developers’,” said Procida. “They have succumbed to bullying from 15 residents from Palisades.”

The Orangetown board is holding an executive session today to drill down into detail on the three plans. Kenny said the town has received 45 “thoughtful” emails about the three proposals and the town is taking the feedback seriously.

Palisades residents almost unanimously praised plans “one and two” for being thoughtful, creative, and in keeping with the bucolic nature of Palisades.

In similar language throughout the evening, residents implored the council to disqualify Procida’s team, citing high density “cookie cutter” housing, objections to clear-cutting the land, and a drain on the town’s infrastructure and public services. Some went as far as to asperse Procida’s character, calling him “erratic.”

On Sunday, Carol Baxter of Palisades, organized a public meeting at the Palisades Community Center, to discuss the future of the HNA center. One resident said developers from projects “one and two” happened to be there.

Procida told RCBJ he was not invited to the meeting but found out about it when he drove past the center earlier in the day and saw a sign. He subsequently came to the meeting and said, “the other developers were given 20 minutes each to speak; I was given five minutes.”

Both plans two and three include a residential component. The land is not zoned for residential use. In fact, the CookFox-Atlas Plan (Plan 2) has alternatives that include new apartments (up to 300 units) and multiple townhouse units.

Plan number “one,’ or what we’re calling “Brooklyn Comes to Rockland Plan” includes a team of Douglas Elliman, Sunia Homes, and New Valley Realty. Calling their plan “a haven for a generation of thinkers, creators, engineers and artists,” the team envisions an updated hotel/conference center, world-class spa, a restaurant with biodynamic gardens, spaces for makers, 50,000-square feet of photo and film studios, test kitchens and co-working. The group emphasizes an environmentally-driven project utilizing solar arrays, water reclamation, and biodynamic farming.

The plan includes between 20 to 30 townhomes in the project’s first phase, and another similar amount for a second phase.

Explaining its plan will include textile and technology workshops, catering kitchens, and business incubators, the team called the concept a place “to learn, teach and communicate.”

Architect Rick Cook, of Cook Fox Architects, and a Palisades resident, said the property should have the “right use.” Cook was in part referring to the town’s stated desire to keep the property on the tax rolls – an issue that is of great concern because several large parcels in Rockland County have been sold to nonprofits and taken off the rolls.

Cook, teaming with Jeffrey Goldberger of Atlas Capital Group, has named the project “Birch Brook Studios,” an homage to the property’s original iteration as Birch Brook Camp, when it was bought by IBM and designed by world-class architect Aldo Giurgola.

“The single best use for the tax base and for preservation is “content creation and studios,” said Cook. The plan outlines nearly 1 million square feet of space utilizing 450,000 square feet of existing space and adding 550,000 square feet for sound stages and film production. The new buildings would be constructed in the large parking lots, while a portion of the hotel would be repurposed into apartments. The plan also calls for 24 lots of modern single-family homes or alternatives with much denser townhome and apartment proposals.

Several of the Palisades residents who gave testimony emphasized the need to keep the enclave rural and bucolic, yet at the same time they threw their support for “plan two”, which would entail a large studio operation.

“We love Palisades for its bucolic nature, its history,” said Palisades resident Rich Ellis. “Actors and actresses are a big part of the town. It makes sense to bring that back home. Filming and production create jobs. It’s something special.”

Lisa Smolan, a Palisades resident and a hospitality consultant, said the town board should consider combining elements from plans one and two.