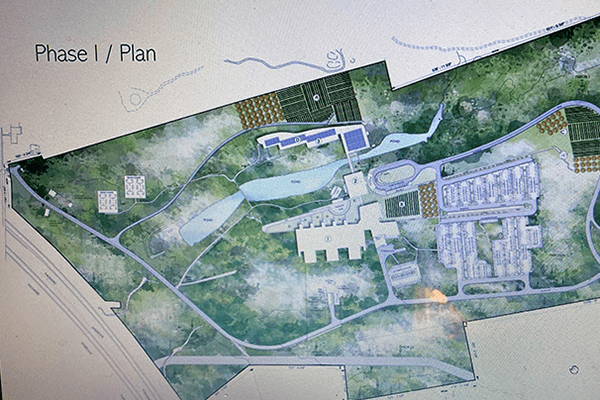 Three muscular development teams with impressive portfolios presented visions to transform the now-shuttered HNA Palisades Training Center during a Town of Orangetown ZOOM meeting on Wednesday. The developers are competing to purchase the 106-acre site at 234 Route 9W through a town-driven effort to keep the site on the tax rolls and to make it relevant and accessible to the community.

At least two developers envision a new era for the property with features that include production studios, biodynamic farms, co-working and wellness centers, while a third proposes an overhaul of the hotel and conference center. All three proposals include housing though two lack specific details in terms of density and scale.

The Palisades HNA center, a Chinese-owned entity, has been on the market for two years. A $40 million offer fell through last year. At that time, Orangetown took the initiative to steer the future fate of the property and has said HNA is cooperating with its efforts.

The town will be taking public comment on the project through Monday (supervisor@orangetown.com), June 7, said Supervisor Teresa Kenny. There will be a special Town Board public meeting on June 9.

Teaming up for what we’ll call a “Brooklyn Comes to Rockland Plan” were Douglas Elliman, Sunia Homes, and New Valley Realty. Calling their plan “a haven for a generation of thinkers, creators, engineers and artists,” the team envisions an updated hotel/conference center, world-class spa, a restaurant with biodynamic gardens, spaces for makers, 50,000-square feet of photo and film studios, test kitchens and co-working. The group emphasizes an environmentally-driven project utilizing solar arrays, water reclamation, and biodynamic farming.

The plan also includes between 20 to 30 townhomes in the project’s first phase, and another similar amount for a second phase.

Explaining its plan will include textile and technology workshops, catering kitchens, and business incubators, the team called the concept a place “to learn, teach and communicate.”

Architect Rick Cook, of Cook Fox Architects, and a Palisades resident, said the property should have the “right use.” Cook was in part referring to the town’s stated desire to keep the property on the tax rolls – an issue that is of great concern because several large parcels in Rockland County have been sold to nonprofits and taken off the rolls.

Cook, teaming with Jeffrey Goldberger of Atlas Capital Group, has named the project “Birch Brook Studios,” an homage to the property’s original iteration as Birch Brook Camp, when it was bought by IBM and designed by world-class architect Aldo Giurgola.

“The single best use for the tax base and for preservation is “content creation and studios,” said Cook. The plan outlines nearly 1 million square feet of space utilizing 450,000 square feet of existing space and adding 550,000 square feet for sound stages and film production. The new buildings would be constructed in the large parking lots, while a portion of the hotel would be repurposed into apartments. The plan also calls for 24 lots of modern single-family homes or alternatives with denser townhome and apartment proposals.

Local Piermont figure Billy Procida, of Procida Funding Associates, is hoping to snag the shuttered hotel, having lost out to HNA several years ago when the entity bought the property for $60 million, and he bid $25 million.

Rather than express a specific vision for the property other than a major overhaul of the hotel/conference center flagged by Wyndham, a new spa and two restaurants, along with an unspecified plan for housing, the money lender/developer is counting on the strength of his dream team to win the prize. That team includes national home builder Toll Brothers, Eric Witmondt of Woodmont Properties, a regional developer who has recently completed 384 apartments on Route 17 in Sloatsburg, Andy Dolce of Dolce Hotels and Resorts, which managed hospitality for IBM and HNA, Doug Smith of Wyndham Hotels, and ENV Architects.

“This is the right team for the project,” said Procida. “It’s as local as local gets.”

Procida’s presentation, told through a “meet the team” video, outlined a proposal that includes updating the tired hotel/conference center to include a world class spa and lobby bar, as well as building out the 100-room hotel that HNA had intended to develop. The plan also calls for bike paths, pedestrian walkways, dog parks and a bocce ball court. The team did not specify the proposed housing density though Toll Brothers and Woodmont Properties are known for multifamily housing projects.

“This is not going to be an easy project,” said Procida, adding many parts of the hotel have exceeded their useful life. “Any developer needs to make a major capital contribution. I want this to happen.”