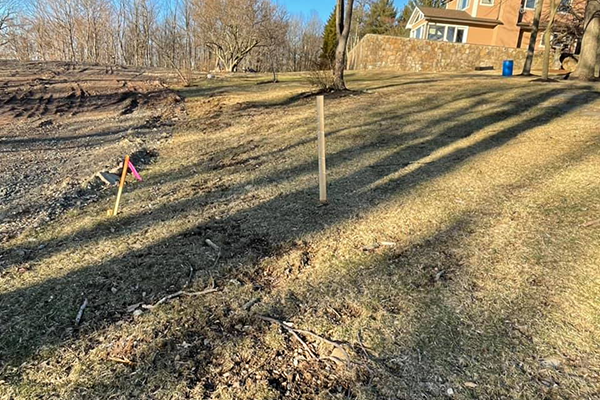 A Valley Cottage homeowner who removed large swaths of vegetation and trees from both his land and adjoining town-owned land on West Hook Mountain is counting on a stormwater management plan to resolve his case in town court.

Attorney Donald Feerick, who is representing the homeowner Edward Teitel at 20 Old Stone Road, told town court justice Scott Ugell on Tuesday his client has undertaken a stormwater management plan that has been submitted to the town for review.

“The plan is 100 pages long and talks about grade, slope and drainage issues,” the attorney said.

Feerick noted the drainage issue was one of three his client has pending with the town, but the land-filling violation is the only one before the court. The other issues pertain to the second-floor addition built without permits and the unpermitted felling of trees on his property as well as on town parkland.

The stormwater management plan would address and mitigate runoff from the property in accordance with the town code, the attorney said. Ferrick also said his client has already taken action to seed and straw the land to prevent runoff.

Deputy Town Attorney Paul Schofield confirmed the town was reviewing the plan and said that acceptance of the stormwater management solution could potentially resolve the case.

Ugell set the next court date for June 29th and Scofield said the town is ready for trial.

Feerick previously told the court said his client had applied for land disturbance permits, given the town a “TOPO,” or topographical map of the property and has undertaken efforts to seed and soil the disturbed land to control runoff.

He also said his client has submitted an “as built” plan to the town for the second-floor addition.

On Nov.16 the town issued a Stop Work Order and Notice of Violation under provisions of the town’s Stormwater Management code. The order calls for the property owner to maintain, repair, and install silt fences, issue a site plan, and submit a survey.

In January, the Town of Clarkstown took Teitel to court for non-compliance with the notice of violation. The town’s suit, filed January 22, says the defendant has failed to comply with erosion and sediment control measures. The suit also says the defendant did not submit a site plan, erosion plan, or survey.

“Some remediation has taken place,” Town Attorney Leslie Kahn said last month. “The property owner has removed the pillars and gate to his home that were on town property and has restored the construction easement.”

Kahn last week said here is “no resolution or settlement” with the town at this time.

Additionally, the Clarkstown Police Department has not concluded its investigation of the tree clearing, Kahn said.

Clarkstown town code imposes a minimum fine of $500 and up to of $1,500 and/or community service in the amount of 30 days for violation of the town’s tree ordinance. The town can also force the violator to remediate damage by replacing the trees. Each tree is a separate offense under the code.

A group of conservationists are pushing hard for Clarkstown to address the felling of scores of trees. They allege the homeowner has removed more than 100 trees from land known as West Hook Mountain. The land was purchased under the Town’s Open Space Initiative. Funds from the town’s $22 million open space bond in 2003 were used to purchase the $1.7 million property. Clarkstown voters passed the referendum in November 2000 for the acquisition of open space. The West Hook Mountain property was cited as one of the driving forces behind the open space bond referendum.