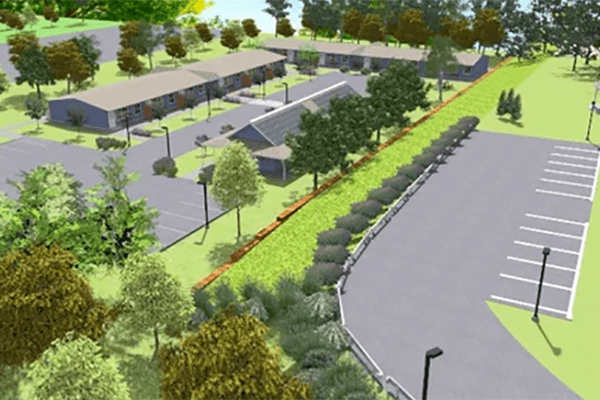 Another 14 one-bedroom units will be built at the Homes for Heroes Veterans Apartments in the Town of Orangetown now that a $5.3 million fund-raising goal has been met.

The grant is part of a $98 million that has been awarded to create 1,054 affordable homes in 20 separate developments across New York, according to Gov. Cuomo’s office. This funding will help revitalize communities, fight homelessness, and expand access to energy-efficient, affordable housing opportunities. RH4H’s housing program is eligible to homeless veterans from the Mid-Hudson’s six counties: Rockland, Westchester, Orange, Putnam, Dutchess, and Ulster under the Veterans Administration Hudson Valley Health Care System.

“There are more than 100 homeless vets in the region,” said John Allen Murphy, chairman of nonprofit charity RH4H. “But we don’t really know the number because there is no hard data. There are many veterans who are homeless, but we don’t know who they are or where they are, but we get requests every week.”

Murphy said the project will break ground in August and will represent the final phase of building on the 7-acre site. The $950 monthly rent is subsidized down to $300 and additional programs for veterans could pay the remainder. RH4H provides on-site case management for its occupants.

Homeless veteran populations are estimated through the annual Point in Time Count, usually taken in January by local social service agencies and overseen by the U.S. Department of Housing and Urban Development. There were 57 veterans recorded among the hundreds of homeless counted during the latest count last year, which covered Rockland, Westchester, Dutchess and Orange counties.

After serving their country, many veterans return home to face a new struggle: with depression, addiction and post-traumatic stress disorder. RH4H has provided homes for vets ranging from their 20s to their 70s – having fought in recent wars in Iraq and Afghanistan, as well as those who fought in Vietnam.

Many cope with life-changing injuries, including amputations and traumatic brain injury.

Of the 20 million military veterans living in the United States, more than 37,000 of them will be homeless on any given day, including 22,740 in sheltered settings and 14,345 in places not meant for human habitation, according to RH4H.

Nearly $400,000 in funding was raised through local contributions, he said.

“This is the last part of the project because we want to give the site a suburban feel,” Murphy added. “We don’t want the site to have an institutionalized feeling to it.”

RH4H was founded after the federal government relinquished Camp Shanks, the world’s largest WWII port of embarkation/staging Area. Created in 1943, more than 1.3 million GIs from all over the USA passed through Shanks to be processed to cross the Atlantic Ocean to fight the Nazi army from D-Day on the Normandy beaches of France to D-Day in Berlin.

The property has had many iterations since closing in 1946, including 300 homes for Rockland veterans through 1956. During the Cold War, a part of the campus was used for the NIKE Missile Program. In 2009, the Federal Government declared the l14-acre surplus and made it available to a charity that would serve the homeless or be used for medical purposes or for an animal shelter.

Murphy, a former Marine Corps veteran and Rockland County Legislator, is also the founder of Loeb House, a nonprofit that provides community housing for the mentally ill population.  RH4H is managed by a seven-member volunteer Board of Directors, which includes five veterans.