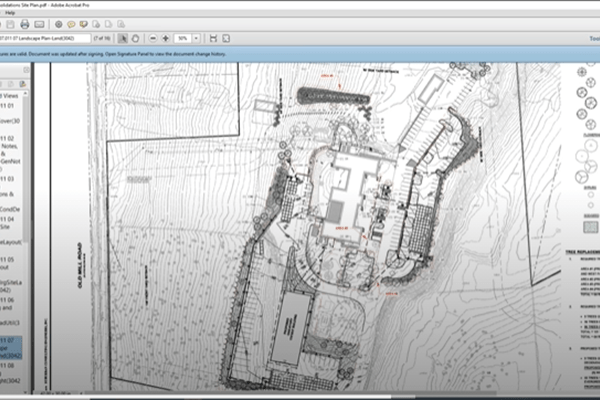 Following a meeting last week with Clarkstown’s planners and engineers, Suez Water New York has been given the green light to propose its updated plans for it headquarters at 162 Old Mill Road in West Nyack to the town Planning Board.

Stymied for more than two years with a prior proposal, the water company will be seeking approvals for what it says is a scaled-down application with less environmental impact.

“What we have here is a site plan that is sensitive to the surrounding area and the environment,” said Lino Sciarretta, Suez’s attorney from Bleakly Platt. “It is a zoning-compliant plan.”

The plan relocates the proposed 11,040 square-foot accessory building roughly 100 feet farther east from the Lake DeForest Reservoir than the previous scheme. The new plan sustains a swath of trees and vegetation between the planned parking field and Old Mill Road. In the original plan, there was a 60,000 square-foot paved parking lot, which would have had a slightly smaller accessory building. The 60,000-square-foot storage yard would have been used to park its fleet of vehicles and store materials needed to maintain its water system including pipes, hydrants, valves, etc.

The new plan reduced the size of the parking field though it is unclear by how many square feet for now.

The new plan also adds parking spaces for emergency and utility vehicles but reduces the number of parking spaces on the north end of the lot closest to nearby residences on Trachtenberg Court.

Suez also committed to not use the facility to house excavation materials.

Suez relocated its operations and storage to the Old Mill Road site, the former Tilcon Headquarters, a little more than a year ago. It still operates its vehicles at its building on West Nyack Road.

The new plan, according to Sciarretta, would not be subject to the kind of environmental scrutiny the public was asking for in the previous application. Suez returned over and over to the Planning Board but met with rebuke over several environmental obstacles. Initially the company agreed to remove above-ground gasoline and diesel storage tanks. However, environmental activists and concerned citizens felt the project was a detriment to the environmentally sensitive reservoir and wanted the planning board to undertake a detailed environmental impact statement.

A SEQR (State Environmental Quality Review) review would have delved deeper into the study of potential environmental impact and could derive at alternative solutions that could mitigate harm. Specifically, community members wanted a second look at proposals for storm water management, a permeable surface for the parking lot, better landscape screening, siting of the parking lot.

In January 2020, for the second time in a row, the Clarkstown Planning Board deadlocked on a three-three vote.

The original plan met a statutory threshold that would have required a comprehensive environmental impact review, based on the area of land disturbance of more than five acres.

In the former plan, nearly seven acres, or 305,000 square-feet of land-disturbance, primarily paving and the building of the new structure mandated the installation of an extensive storm-water management system.

Moving forward, the new plan says it will only disturb 3.8 acres, which would mitigate SUEZ’s need to participate in a full environmental review. At 3.8 acres, the project would be considered “Unlisted,” under New York SEQR Act.

It is unclear whether work already done on land previously disturbed and prepared for use will be considered as part of the current application in consideration of SEQR.

“We’ll have a better idea of the breakdown once we receive the drainage report,” said Town Planner Joe Simoes.

The report will be submitted to the Planning Board.