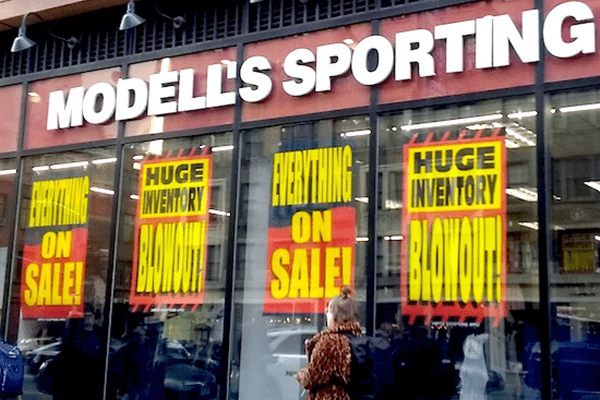 Guarantor On Hook For Rent Despite Company’s Bankruptcy

EklecCo New Co LLC, the company that owns The Palisades Center, has sued the guarantor for Modell’s Sporting Goods for nearly $450,000 for nonpayment of rent since March 2020.

The plaintiff alleges that Henry Modell & Company Inc., the guarantor, is responsible for back rent owed since Modell’s Sporting Goods closed its store in August 2020 but stopped paying rent in March 2020.

Modell’s, which was struggling prior to the pandemic, filed a petition of bankruptcy in the United States Bankruptcy Court in New Jersey in March 2020, but continued to operate its store at the mall. Modell’s rejected the lease at the Palisades Center and closed its store in August 2020.

The lawsuit holds the guarantor responsible to recover past due rent and damages under the lease. Under the terms of the lease, the tenant was obligated to pay $63,193 monthly for 2020, but an additional late fee brought the total due to $67,341 monthly. Past due rent and late fees due through January 2021 is $449,948, according to the suit.

Additionally, since the Palisades Mall has not found a replacement tenant, the guarantor’s damages continue to accrue. In addition to past due rent, the suit also seeks lost rent from Feb. 1st 2021 through the end of the lease in January 2024 plus attorneys’ fees.

Modell’s Sporting Goods, which also closed its location at Rockland Plaza in Nanuet, had planned to close its remaining 115 stores due to poor earnings. Modell’s, which is about 130 years old, has billed itself as the nation’s oldest family-owned sporting-goods retailer. The chain lost $50 million 2019.

Last August, The Palisades Center sued Bed Bath & Beyond in Rockland County Supreme Court for more than $500,000 in back rent. That suit has been settled.

And late last year, the mall sued the LLC that operates Solstice Sunglass Boutique and its guarantors for nonpayment of rent for the past ten months. The company owes $90,980 through December. The company’s lease runs through Jan. 31, 2021. It is unclear whether there will be a renewed lease.

The defendants did not answer the complaint.

In the suit, filed Dec. 21, EklecCo claims the tenant hasn’t paid rent since March 1st, prior to the pandemic shutdown.

Solstice Sunglass Boutique, with more than 70 locations nationwide, was operated by Solstice Marketing Concepts, LLC, a New York-based company. The LLC was a subsidiary of the Safilo Group, an Italian eyewear manufacturer and distributor. Safilo in 2019 sold the LLC for $9 million to Fairway LLC, an American investment fund.

The suit alleges that the lease was assigned to Fairway LLC, but the conditions of the assignment required Solstice Marketing Concepts, the original tenant, and Safilo to remain liable for the remaining lease obligations.

The suit also sues Fairway LLC as an assignee under the lease.