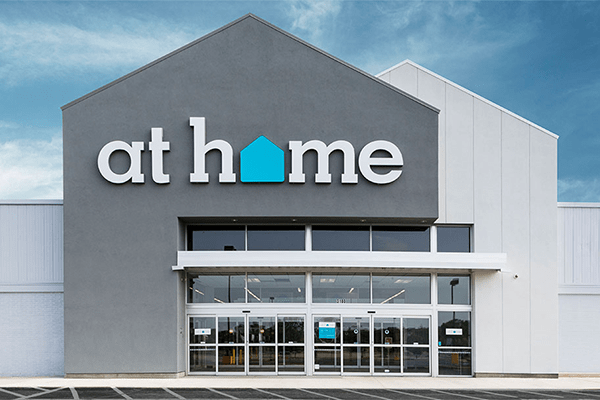 The long-awaited home décor superstore At Home opened its 101,488-square-foot location at the Shops at Nanuet today on the ground floor of the former Macy’s department store.

The department store, which had been shuttered for several years, is being redeveloped by MRA as a modern 220,000-square-foot retail space with a grand two-story lobby. The upper floor remains vacant, but brokers say there is interest in the space.

The Plano, Texas-based home decor superstore retailer that will occupy the former Macy’s store in Nanuet, was originally scheduled to open mid-April 2020. At Home has signed a 10-year lease for the 100,000-square-foot store.

The fast-growing retailer, which plans to open grow its chain from about 180 to more than 600 stores, is trying to defy the odds as home furnishing stores nationwide are collapsing under the weight of internet sales. The company now operates more than 220 stores in 40 states across the country.

The brand is a “self-help,” warehouse-style home décor superstore that generally sells more than 50,000 home furnishing items in a variety of styles and for low prices.  Offerings include furniture, mirrors, rugs, art, housewares, patio, and seasonal products. At Home does not sell online. The company believes women, who comprise 85 percent of its consumer base, want a tactile shopping experience. More than 400 new products arrive on the shelves weekly.

The welcomed opening comes amid a fraught time for the Shops at Nanuet, which has lost several stores during the pandemic and before.  RCBJ recently reported the closure of the Lululemon store. Late last year, closures included The Walking Company, which sells athletic footwear, and the chain Tutti Spa & Nails.  The COVID-19 pandemic and lockdown put the nail in the coffin for Zinburger, an upscale burger joint and Kitchen goods retailer Sur La Table.

MRA acquired the site in December 2018 in partnership with long time equity partners Angelo, Gordon & Co., LP, and simultaneously announced the lease to At Home as the new anchor. The company, well known for its work in reinventing properties to meet modern demand, gutted the building and installed new mechanical, electrical and plumbing systems, and high-speed elevator and escalator arteries. It finished the reconstruction of the former Macy’s store during the pandemic and worked closely with the development team of At Home to build out the interior in preparation for the grand opening.

“This is a fantastic day to celebrate a win for brick-and-mortar retail,” said MRA CEO and founder Joe Farkas. “The opening of the At Home store at the Shops of Nanuet demonstrates that there will always be a need for best-in-class retail store experiences in well located and designed centers across the country.”

Farkas—who has been recognized for his work redeveloping properties, including the former Stella D’oro factory in the Bronx.

Stop & Shop is relocating its 32 South Middletown Road in Nanuet location to the former Fairway Market site, which closed because foot traffic had waned.

David Landes and Jeanine Kemm of Royal Properties serve as leasing agents for the remaining 118,000-square-foot space, as well as a 3,000-square-foot pad site that can accommodate a double drive-thru.