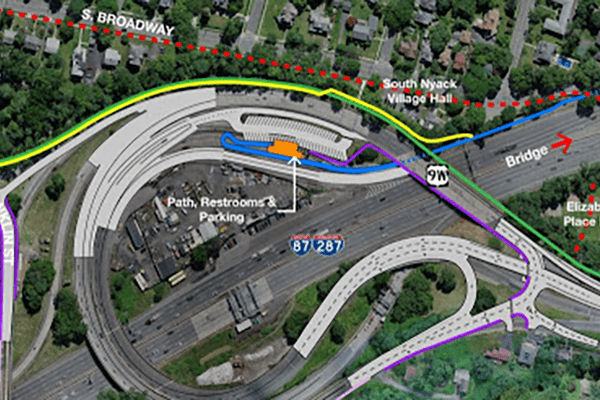 Laberge Group To Create Dissolution Plan For Capped Sum Of $35,000

The Village of South Nyack board on Monday voted to hire Laberge Group to create a dissolution plan for a capped sum of $35,000 unless the board agrees to allocate additional funding.

Laberge Group, an Albany-based architectural and engineering firm, was one of three applicants bidding for the project in a nearly four-hour Zoom meeting that concluded with the board’s quick and unanimous decision to hire the company that made a detailed and thorough presentation.

“Your village is losing its history, control over land-use, its identity,” said Ben Syden, Laberge’s vice president. “Identity makes a village what it is. But loss can potentially be a gain.”

In December, South Nyack’s residents voted to dissolve the 142-year-old government and become part of the Town of Orangetown with nearly two thirds in favor.

Syden’s sweeping presentation imbued empathy, referencing multiple times concern over the governance of land-use in the wake of the sale of Nyack College.

“Land use laws will remain in place for two years or until the town changes it,” he said. “The town can change it on Day One. Some towns adopt a village’s zoning codes. Some don’t.”

But he also emphasized his firm’s role in brokering consensus between villages and towns that merge.

The Laberge Group, founded in 1964, specializes in architecture, planning, engineering, and government operations. Syden said his company has assisted at least 11 villages in dissolution, including Brookhaven, Town of Moriah, Town of Salem, Pawling and Port Henry.

Laberge Group was retained by the Village of Mastic Beach to assist in their dissolution process. Mastic Beach is the largest Village in the Town of Brookhaven, and also the largest Village in New York State to dissolve, with over 15,000 residents. Newly incorporated in 2010, the Village had been functioning on an austerity budget, and residents desired an increase and enhancement of municipal services. Laberge Group assisted in securing a $50,000 Expedited Re-Organization Empowerment Assistance Grant for the Village, which allowed for the development of an Interim Village Dissolution Study and Final Dissolution Plan.

Syden said his firm has secured more than $245 million in grants over the years but warned South Nyack that no grant money is currently available due to the pandemic crisis.

“There is no funding available from the Department of State,” Syden said, adding that a dissolution plan typically costs about $50,000 and the implementation plan costs another $50,000. “If Congress passes the Cares Act and makes the state whole, maybe. But right now, there’s no money available.”

LaBerge beat out CGR of Rochester, the company that prepared the initial $18,000 report that laid out what dissolution might look like. Also competing for the job was the MRB Group, also of Rochester, which made an oddly slanted pitch that emphasized the opportunity for voters to rethink dissolution with a second bite at the apple by way of a permissive referendum.

“Dissolution,” said Matt Horn, the company’s principal. “Not sure it’s always the answer.”

And he went on with phrases such as “should this progress,” and “it’s a lofty ideal, a critical concept, not always a straight line.”

While giving his pitch, commenters on the Zoom meetings, said “they didn’t do their homework,” and “okay, so they’re against dissolution” – an odd strategy for a village that had recently voted overwhelmingly for dissolution.

Weighing in last night, Orangetown Supervisor Teresa Kenny, promised the town would work cooperatively with the village for a smooth transition.

Orangetown officials have said they will add five police officers and three DPW workers to their forces.

Dissolution could take up to two years. The mayor and four trustees must now create and approve a plan by June 19, 2021, with public hearings thereafter. The plan considers the disposition of village property, employees, municipal contracts, debt and other issues.