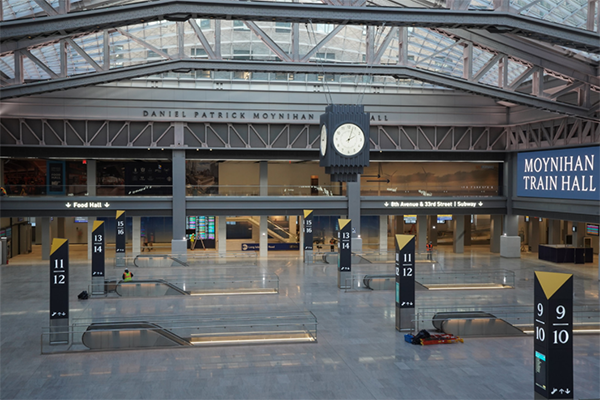 U.S. Postmaster General James A. Farley Rose From Stony Point To The Halls Of Politics And Commerce

A Rockland native’s legacy has been dimmed with the New Year’s Day opening of the Moynihan Train Hall, an annex to Manhattan’s much-hated Penn Station.

The $1.6 billion hall, in the old James A. Farley Post Office Building across Eighth Avenue from the main station and Madison Square Garden, will serve as a waiting room for Amtrak and Long Island Rail Road passengers.

The 255,000 square foot space is designed to counter the bleak underground hell of Penn Station, and replace it with a sprawling open waiting area centered around an Art Deco clock, and 92-foot-high skylights made out of an acre of glass. It is said to rival Grand Central Station.

“Senator Daniel Patrick Moynihan was a man of true vision,” said Gov. Andrew Cuomo. “He saw the potential in an underutilized post office and knew that if done correctly, this facility could not only give New York the transit hub it has long deserved but serve as a monument to the public itself.”

Farley served as chairman of the New York State Democratic Committee, chairman of the Democratic National Committee, and Postmaster General under the first two administrations of President Franklin Roosevelt. A business executive and dignitary and a Knight of Malta, Farley was commonly referred to as a political kingmaker, and he was responsible for Roosevelt’s rise to the presidency.

He also was the former chairman of Coca-Cola Export.

The Rockland native worked his way up from humble Irish immigrant beginnings. His father James Farley worked in the brick-making industry. After his father died, Farley helped his mother tend a bar and a grocery store. The Rockland native built General Builders Corporation, which would become the city’s largest building supply company in the early 20th century. Farley’s firm was awarded federal contracts under Hoover administration to supply building materials to construct buildings now considered landmarks, such as the Annex of what became the James A. Farley Post Office Building on Eighth Avenue.

In 2007, the Roman Catholic Archdiocese of New York named Farley as one of its “Bicentennial People/Innovator” in commemoration of its 200-year anniversary. He was the first guest on NBC’s Meet the Press, the longest-running show in television history. In a mention in “How to Win Friends and Influence People,” Farley was known for his ability to remember names and details of almost every person he met.

Moynihan Train Hall will improve the travel experience of the busiest passenger transportation facility in the Western Hemisphere, used by more than 700,000 passengers per day – more than LaGuardia, John F. Kennedy and Newark International Airports combined.

The main hall that once served as the Post Office’s mail sorting room is reminiscent of the original Penn Station’s vaulted concourse. Supported by three of the building’s original steel trusses with an intricate lattice framework, the new skylight soars above the train concourse, bathing passengers in natural light.

The Farley Building was one of the first buildings landmarked under preservation laws established in the wake of the destruction of its sister structure, the original Penn Station

The original Penn Station was torn down in the 1960s.