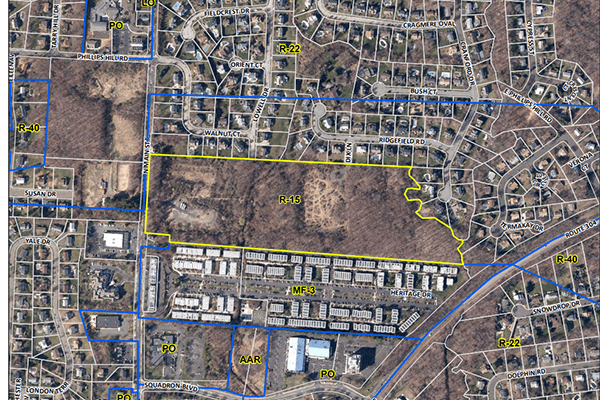 Town Planning Board Will Hear Application On Jan. 6

The Apfelbaum Family Ltd Partnership (AFLP), which for years has met with resistance to developing Buckley Farm on North Main Street in New City, is coming back to the planning board on Jan. 6 at 7 pm with a proposal to build senior housing plus 22 single-family homes.

The developer is seeking approval to subdivide the 30-acre site into 22 single-family building lots, and for a separate lot to develop six buildings with 195 senior housing units. There is likely to be continued opposition to building on the environmentally sensitive parcel that includes wetlands, floodplains, and a tributary to the west branch of the Hackensack River.

If the project is greenlighted, Buckley Farm would bring the tally of planning senior housing units in Clarkstown to nearly 500. The Town of Clarkstown’s updated Comprehensive Plan, which is still in the works, has set a goal of adding 700 units of senior housing to the town. In 2014, Clarkstown amended its zoning code to allow for a total of 700 units of senior citizen housing town-wide, subject to a raft of conditions including that development does not cause traffic congestion, does not adversely affect the character of, or property values in the area, and that it does not negatively impact water supply, waste disposal, or any other public health and safety issues.

The comprehensive plan also calls for development a broad variety of housing units for seniors at all income levels, lifestyles and levels of care. The average cost of assisted living in and around New City is $4,978 per month compared to the national median of $3,495, according to caring.com.

Earlier this month the Clarkstown Planning Board granted preliminary approval for a special permit to a developer who intends to build a senior housing complex on the former Schimpf Farm in West Nyack despite concerns from neighboring residents and members of the Rockland County Department of Planning. The vote was 6-1 in favor of the special permit which remains subject to review of the tree preservation plan and further proceedings before the Town’s Architectural Historic Review Board.

The Schimpf project calls for an approximately 169,000 square foot senior housing complex with 127 units of 55-plus senior housing, a 5,500 square foot clubhouse, and 216 parking spaces. The plan also includes patios and barbeque areas, a community garden, and walking paths throughout the site.

AFLP also needs a special permit to build on the R-15 zoned land. The planning board in January will consider the applicant’s DEIS (Draft Environmental Impact Statement). The mostly undeveloped wooded lot has an abandoned horse track.

Buckley Farm was named for Charles A. Buckley, a politician who served in Congress for 30 years until 1965. He bought the Rockland acreage in the 1920s as a country home and horse farm. It’s been said the building and the horse track may have cost him his congressional seat because he was accused of contractor kickbacks.

Town officials acknowledge the aging population is living longer, and it is harder to maintain the cost and maintenance of living in single-family homes. The town views senior living as an option for older people, and as a means of keeping that generation close to their children and grandchildren.

Town planner Joe Simoes said roughly 300 units of senior citizen housing have been spoken for with Vincent Village and Atria. The proposed Buckley Farm, a 55+ senior housing complex, would include six buildings comprising 98 one-bedrooms, 96 two-bedrooms, and a three-bedroom superintendent’s unit.

Once Clarkstown reaches the threshold of 700 new units, there will be a one-year waiting period before new proposals will be considered. It will be up to the town board to raise the limit.