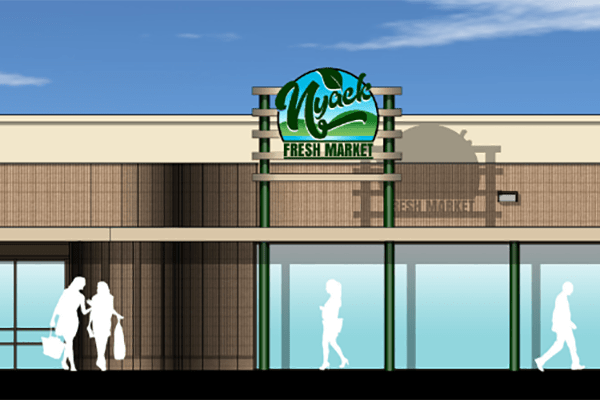 “Nyack is a wonderful community and we’re looking forward to bringing the best of what we have,” said Bermeo.

But first, Thomas LiPuma, who owns TALI Plaza of Nyack, LLC at 117-125 Main Street, must be granted approval by the village’s Architectural Review Board to alter the existing 28,000 square-foot theater portion of the building to a grocery use.

The board is expected to discuss the application at its Dec. 16 meeting.

Residents have been waiting nearly seven years for the theater space, which went dark after severe flooding in June 2011, to be put back to use. TALI Plaza also includes the attached two-story strip mall that sits along Main Street.

Mayor Don Hammond, who welcomes a supermarket in the village, says maintenance on flood control is done annually.

Bermeo’s two Spring Valley supermarkets are targeted to the Latino community but the Nyack market will be a full-scale supermarket selling produce, deli, meat, fish, bakery, dairy, and household items.

“This will be for everybody,” he added.

An investment of $680,000 is necessary to transform the space to a supermarket.

The Manhasset, Long Island-based developer that owns the center received at least $3.2 million in insurance payments after a storm deluged the building with more than seven feet of water. Milbrook Properties, the management company, sued the village. The suit snaked through the New York Supreme Court in Rockland County before heading to arbitration before Richard P. Byrne of National Arbitration and Mediation in Harrison.

Byrne in April 2018 determined the village was liable for the damage for failing to maintain its storm water control system to adequately handle the storm waters. Milbrook was awarded $2.8 million in damages. However, in agreeing to go to arbitration, both sides agreed to cap damages at $2.2 million, which was paid by Nyack’s insurance company.

Milbrook is currently marketing empty spaces in the strip mall. The company recently leased the corner location to Farina Bakery, which the Pie Lady vacated earlier this year. And the broker’s flier says a Vietnamese restaurant has also signed a lease.

The Riverspace Theater has a storied past – it was once the Venturini Cinema East movie theater, and later the Helen Hayes Theater Company, named for Helen Hayes, a longtime Nyack resident. After Helen Hayes closed, the space became home to ArtsRock organization, an arts presenter without a venue.