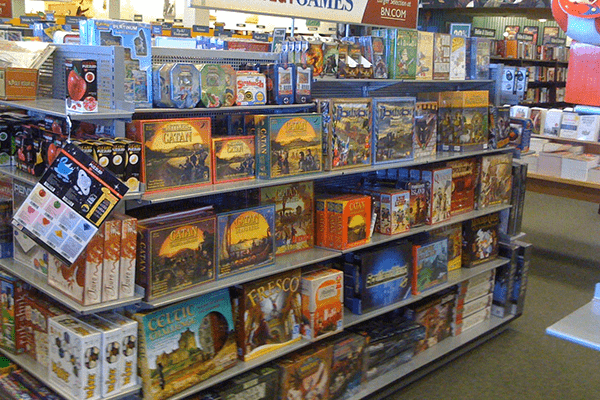 U.S. toy industry sales spiked 16 percent in the first half of 2020

Remember when your parents or grandparents had a game table or a parlor with a chess set or a backgammon table or a 2,000-piece puzzle?

The time machine has arrived. The COVID-19 pandemic has many families spending more time at home together, and that means more time to play and have fun together.

The toy category, struggling since the death of Toys R Us, has gotten a boost this year as desperate parents try to keep their kids entertained.

“The holiday season – Easter, Passover – was the busiest season we’ve ever had,” said Yaakov Miller, who owns Toyriffic in Pomona, which sells tactile toys such as puzzles, board games, educational and science kits. “The most popular item was puzzles.”

“We are chasing extraordinary growth in demand,” said Ynon Kreiz of Mattel.

Miller said the lockdown was a challenge. “The state said liquor was an essential, but not toys.” But the merchant, who does no business online, said he took orders by phone and delivered toys by car.  Since reopening in July, business has leveled off though the toy seller said he’s still fielding requests for games such as Ticket To Ride, Catan, CodeNames.

The pandemic has been challenging for a lot of industries. But the volatile effects of COVID-19 have not been felt equally across categories. It has been a terrible year for suit sellers like Tailored Brands and Brooks Brothers but a banner one for retailers of outdoor gear, bicycles, sweatpants, hammocks, and booze.

But toys have enjoyed a noticeable spike – and analysts expect sales to be robust heading into the holiday season as families remain relatively homebound and many schools remain closed. Even macroeconomic gloom may not slow down growth in the category.

U.S. toy industry sales spiked 16 percent in the first half of 2020, according to the NPD Group. Toy makers say the pandemic has driven much of that demand. Parents with kids home from school, and without organized sports and activities on the weekends, have been desperate for ways to entertain them.

In the first half of 2020, puzzles led the way with 37 percent percent growth, followed by outdoor sports and toy products (up 27 percent), building sets (14 percent), arts and crafts (11 percent) and explorative toys (1 percent), according to NPD.

Games and puzzles have been hot commodities. They were in the toy industry’s top three “supercategory” performers between January and September, according to market researcher NPD Group. Sales, at some $1.5 billion, were up 42 percent from the same period in 2019, NPD stated in a late-October report.

Over the last year, sales of chess sets in the United States rose by around 25 percent, only slightly faster than the toy industry overall, said Juli Lennett, a toy industry analyst with NPD, a market research company. Since mid-October, when “The Queen’s Gambit” premiered on Netflix, sales have grown 125 percent.

At Goliath Games, a toy company that sells several varieties of chess sets, sales are up more than 1,000 percent compared with this time last year, the company’s director of marketing told NPD.

A spokeswoman for eBay said the company had recorded a 215 percent increase in sales of chess sets and accessories since the debut of the show in October.

“Card gaming was our bread-and-butter,” said Etter. “It drives our sales because it’s the way we build our community. Due to restrictions, we’re not able to do tournaments but it hasn’t stopped people from collecting. Sales have been strong.”

At a time when other retailers are struggling, or have not reopened in the Palisades Center, at least one toy store and one gaming store have opened. Lollipop Toys, an independent toy store specializing in toys for children from newborn to 10, opened its newest location on Level One next to 7-Eleven.

Good Game Lounge, a location for gaming, streaming, tournaments as well as science, technology, engineering, and mathematics (STEM) programs, opened its first location at the mall. The 8,500-square-foot lounge is located on Level One next to Sephora. Good Game Lounge was founded by entrepreneur Malik Adjoyi, a Rockland County resident.

Meantime, pandemic demand had toy companies scrambling, judging from the comments on recent third-quarter conference calls from the CEOs of Mattel and Hasbro, the two big U.S. toy players. And the scrambling appears to be continuing.

“We are chasing extraordinary growth in demand,” said Ynon Kreiz of Mattel, famous for its Barbie franchise but also ranked No. 1 in games and puzzles in the U.S. by NPD for the card game Uno.