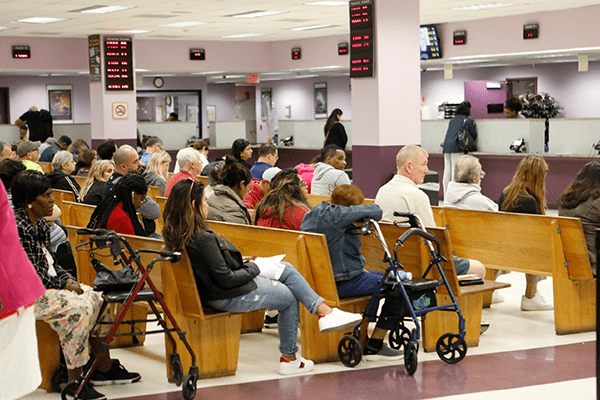 It’s settled: The Department of Motor Vehicles in Samsondale Plaza on Route 9W in the Village of West Haverstraw is not going anywhere.

“The DMV is staying in the Village of West Haverstraw,” said Senator James Skoufis (D-Hudson Valley).

The news, announced this morning at a press conference, was the result of a year-long negotiation amongst local mayors, public officials and the DMV State Commissioner to keep the state entity in place. The DMV, which has been at the shopping center for more than a half century, had been contemplating a move to Clarkstown.

“This would have been devastating,” said Skoufis, adding that it would have cost jobs and deprive the Villages of West Haverstraw and Haverstraw the economic benefits of people who come to the DMV but also fill up with gas, shop at the supermarket or drug store, or do other errands nearby.

Additionally, the Senator pointed out that many in the Village of Haverstraw without cars can walk to the facility, and that a taxi or Uber to Clarkstown would have cost more than renewing a license.

“There’s only one DMV in Rockland and we have it,” said Village of West Haverstraw Robert D’Amelio.

An insiders said the DMV renewed for at least another 10 years at a favorable rent, but was not specific on details. The DMV’s lease had been up and was in negotiations with its landlord Paragon Realty Group LLC.

D’Amelio says between 800 and 1,200 people visit the DMV daily — or 250,000 annually. Traffic to the DMV spills over to other retailers in the shopping center and along the Route 9W corridor, as well as to restaurants and gas stations.

“The managers at Stop & Shop tell me people come over to the store to fill out DMV forms,” said the mayor. “They get something to eat. They buy food while they’re there.”

After being alerted to the DMV’s potential move, Skoufis and Assembly member Ken Zebrowski, along with local officials, lobbied the state DMV to remain at the West Haverstraw location.

Senator Skoufis said, “During a time when so many of our restaurants and shops are already facing substantial challenges, the West Haverstraw DMV remaining in the community is a big win and welcome news. We worked tirelessly over the past year to get the state’s agreement to keep the doors open at this location – and we’re proud to report that this DMV won’t be going anywhere.”

Town of Haverstraw Supervisor Phillips said, “I sincerely thank Senator Skoufis and Assemblyman Zebrowski for their persistence and understanding on this issue. This DMV is a vital part of our community and plays a huge role for many of our businesses. I remember getting off the elevator in 1975 ready to get my license at this DMV and it’s a huge staple for so many residents. This is such a great win for the people in Haverstraw.”

Clarkstown had been fighting hard to lure the DMV, hoping the state agency will consider empty space at a shopping center such as the Shops at Nanuet or to the vacant Met Fresh Supermarket in the Hub Complex on Route 59.

Samsondale Plaza, a 140,000-square-foot shopping center, is anchored by Shop & Stop and tenants including include Mandee, Advance Auto, Sprint, Rent A Center and Dollar Tree. The landlord, Paragon Realty Group LLC is marketing four spaces, ranging from 1,125-square-feet to 9,372 square feet – about 10% of its total space.

Indoor construction and revitalization of the Haverstraw DMV is also set to take place in the coming months.

D’Amelio says he has not yet seen plans but he says they’re planning a new floor plan.