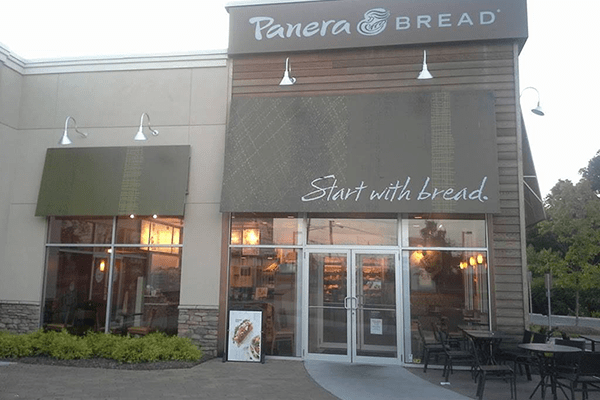 Signs Have Been Scrubbed Off Store And Center’s Marquis

The sign has been taken off the building. The retailer’s name is no longer on the shopping center marquis. A sign on the door says it is closed.

Panera Bread at the Palisades Plaza at 130 N. Rt 303 in West Nyack has gone dark. It would appear the store is not going to reopen but the center’s landlord said no decision has been made and the tenant is still on the hook for a lease that has several years remaining.

The West Nyack Panera Bread is owned by a Delaware-based franchisee, Take Home the Bread LLC, that operates 12 locations in the Hudson Valley. The franchisee is down from 15, with two recently closed locations in Westchester and West Nyack’s location shuttered.

Rockland’s only open Panera is located at Rockland Plaza in Nanuet.  According to Marcus & Millichap’s website,  a new Panera Bread will be located at 15 North Airmont Road in Suffern but an open date has not been announced.

Franchise owner Donald Harty could not be reached for comment.

The closure of Panera Bread, a popular bakery-café, delivers another blow to the small strip center that opened after the Great Recession and attracted anchors including Panera, Verizon and Visionworks. Earlier this year, pre-COVID, Hoopla Frozen Yogurt closed its doors. And Verizon is closed, perhaps temporarily.

“The shopping center has a great location,” said David Landes, a broker with Royal Properties. “It’s right off the NY State Thruway exit, a quick in and out.”

New York, and particularly Rockland County, has been hard hit by the coronavirus pandemic. The shutdown forced retailers like Panera to adapt to a new way of serving and delivering food. The Panera location at Palisades Plaza has a drive-thru, which for many fast-food companies has been a life raft to weather the absence of in-store dining. An employee at Visionworks said Panera never reopened during the pandemic.

Overall, the company continuously shows ways to respond to a changing economic and socially conscious landscape. Panera Bread customers can soon drink as much of the chain’s coffee and tea as they want, all for $8.99 per month. The recently launched subscription program follows an overhaul of its breakfast and coffee offerings last year with new options like wraps. Iced coffee and hot tea will also be included in the program, which is part of Panera’s loyalty program.

This week, the company will lead the charge in labeling items as climate friendly. Whenever the ingredients of the chain’s salads, sandwiches and soups collectively have a footprint of less than 5.38 kilograms of carbon dioxide equivalent, the menu item will carry a badge proclaiming the entree a “Cool Food Meal,” the designation from the World Resources Institute.

A decade ago, Panera Bread became the first national restaurant chain to disclose the calorie counts of its menu items.

Panera was founded in 1980 as a stand-alone, 400-square-foot cookie store in Boston and today has 2,128 bakery-cafes in the United States and Canada, 140,000 employees and annual sales in the billions.

In the early days, founder Ron Shaich, expanded his cookie business by partnering with the late Louis Kane in a small French bakery chain called Au Bon Pain. The pair soon discovered that croissants laden with upscale ingredients like Boursin cheese and fresh roast beef were crowd pleasers and the bakery became a bakery-cafe. In 1991, Au Bon Pain Co. Inc. became publicly traded and opened hundreds of bakery-cafes in cities along the East Coast and overseas.

In the mid-1990s, they rebranded the St. Louis Bread Company concept and named it Panera, a combination of the Italian words for bread (pane) and time (era). Panera became a leader in the burgeoning fast-casual restaurant segment. In 1999, all Au Bon Pain divisions were sold to an investment firm so resources could be directed toward growing Panera. The remaining public company was renamed Panera Bread Company.