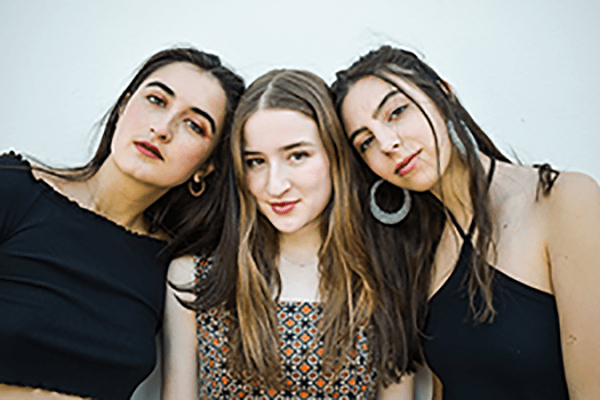 In a word, yes let’s call it a word, Kid Sistr’s sustained success is all about ‘stick-with-it-ness.’ Each member of this millennial female musical trio has been working at her craft for a good part of each one’s young life and no obstacle has yet to block them.

The band’s ease at pivoting during the pandemic via its use of TikTok notched up its visibility when touring became impossible, and through that success, it landed representation.

Kid Sistr, which includes Valley Cottage resident Isabella (Sabel) Englert, 23, on guitar and vocals, and Connecticut denizens Sara Keden on bass and vocals, and Rebecca Webster on drums, united in 2017 with original songs that pull threads from bubble gummy Top 40 charts, 1980s new wave, and moody alt-rock singer-songwriter odes on the meaning of life. From the perspective of millennials, of course.

The band has been gaining traction over the past few years and had planned to tour its debut EP, a self-titled, six-track record this summer.

Instead, the band, which had previously inched onto the indie scene in 2019 when Counting Crows’ Adam Duritz asked the group to perform at his annual Underwater Sunshine Festival, and by performing at Turning Point in Piermont, the Bitter End, and Rockwood Music Hall in Manhattan, took to TikTok during the lockdown to show off its stuff.

“What’s happening for them on TikTok is a reflection of their musicality, not just their personality and how they are constantly challenging themselves as much as they are challenging their growing fan base,” said Grammy-nominated producer and music executive Billy Mann.  “My team and I are excited to represent them as they grow their audience and their artistry.”

Kid Sistr, named because each band member has one, is a collaboration of three musicians who tasted success independently prior to forming a band. Sabel built 550,000 streams on Spotify and Soundcloud. Keden has been touring since the age of 15 and Webster has performed with Michael League of Snarky Puppy, members of the Allman Brothers Band, and members of Dead and Co.

Last fall, Englert and Keden retreated to Nashville to write songs while Webster returned to college in California. Englert worked a day job at an organic health and beauty store while they wrote and crowd-funded money for their EP. Their single Little Sister Song is a nod to their younger female siblings marking milestones of tween and teen years. Kind of an earthy Taylor Swift song.

In early March – with no idea that the world would morph into an unfamiliar orb where concert venues were shuttered – Englert and Keden had come back to New York and Connecticut to prepare for a summer tour. When the coronavirus pandemic hit, Englert at first luxuriated in spending quality time with her parents and sister.

“The first couple of weeks I wasn’t thinking about music,” she said. “We figured we’d have to push back our tour by a few weeks. I was happy to sit back and do other stuff. I starting writing a movie script.”

As the calendar days turned to weeks, Englert got antsy.

“We had been talking about TikTok for a long time,” said Englert, referring to her band mates. “A lot of kids my age got on the platform because of the pandemic. We had looked down at the platform – kind of laughed about it. But now there wasn’t a lot we could do so we said we might as well try it.”

Gathering socially-distanced, Kid Sistr met week after week in Webster’s Westport, CT backyard using professional studio equipment to pound out 25 videos for TikTok. They produced one-minute covers with snippets from popular songs. The first Harry Styles cover racked up 2,000 views but the Knacks’ My Sharona blew up to 100,000 views a week later.

Within two months, the band had 70,000 followers and they were making videos to tease their EP.

TikTok is a platform built on trends: Dances, songs and transformation challenges come and go, with seemingly little rhyme or reason to their popularity. Despite the randomness, Kid Sistr caught the attention of Variety Magazine, the entertainment industry’s bible.

“Over the course of quarantine, TikTok’s mysterious algorithm has become a champion of something much more permanent by pushing all-female bands to the forefront of the platforms’ “For You” page,” Ellise Shafer wrote in Variety wrote July 2. “Four of Diamonds, K3 Sisters, Taylor Red, Crimson Apple, Kid Sistr and Avenue Beat are six of those bands, all of which celebrate sisterhood in their own way. Though they differ in musical genre and content type, they have found TikTok to be a life-changer when it comes to their music careers.”