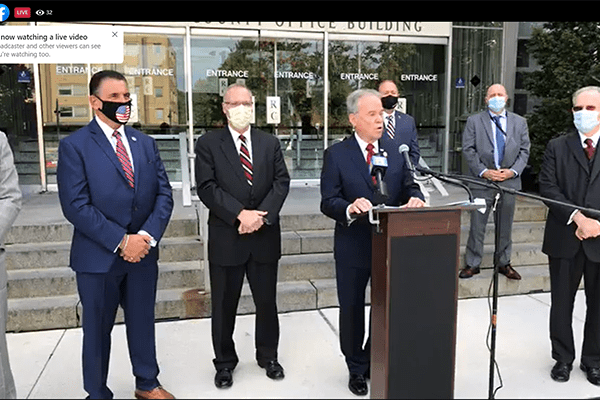 The proposed 2021 budget also temporarily leaves vacant 154 positions, though it does not contain any further layoffs.

“Over the last several weeks we have begun to see increases in both our sales tax and mortgage tax revenue,” said County Executive Ed Day during today’s announcement of the budget proposal. “This gives us a clearer fiscal picture on the critical revenue streams we are budgeting for 2021.”

By mid-July, reeling from the effects of the pandemic shutdown, the county was facing a projected shortfall of between $40 million to $50 million for 2020. Add to that, New York State cut funding by 20 percent for mandated programs. The blow will be tempered by a County surplus of nearly $60 million though there won’t be much of a cushion left, said Day.

Day said state cuts have hurt many local vendor contracts with agencies including Meals on Wheels, People To People, the Martin Luther King Multi-Purpose Center, Catholic charities, and others, but the county’s hands are tied.

“We will work to minimize the impact on residents but it will be both difficult and will result in severely reduced services to those who are in dire need due to the effects of the COVID-19 crisis,” said Day. “We are not in a fiscal condition where we can make up the shortfall.”

“While we have faced some difficult budgets since I took office, this year was like nothing I have experienced,” said Day. “In many ways, this is worse than the 2008 budget at the outset of the Great Recession.”

Facing a fiscal tsunami due to reduced sales tax and state aid, the county implemented austerity spending measures, a hiring freeze, applied for FEMA disaster assistance, and eliminated 18 vacant positions to save $1 million. The county is only moving forward on capital projects already in progress or those that will show “a positive return on investment.”

The Republican county executive did not hide his disappointment in the Democratic majority’s decision to reject fiscal strategies the county executive said would have offset some of the pain. Nine legislators rejected proposals to temporarily add one-half of one percent to the local sales tax to take effect December 1, 2020, or as soon thereafter as possible, for a period of three years until November 30, 2023, as well as a proposal to sell the Sain building.

Day will submit the 2021 spending plan to the legislature by the end of the day.