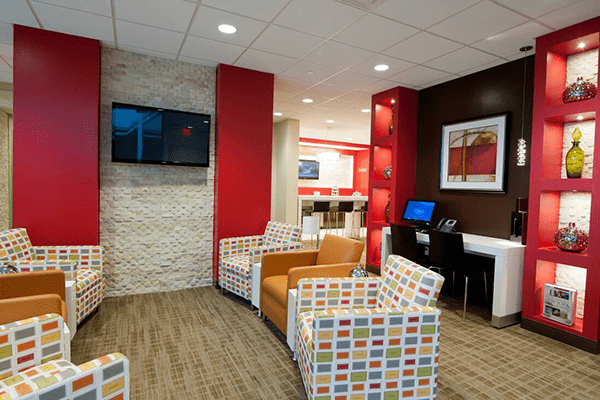 Company Expects Demand For Co-Working In Suburbs Will Remain Robust

Co-working nationwide, particularly in urban centers, has been dealt a blow by the coronavirus pandemic. The coronavirus is having a severe impact on the short-term office market, with many smaller players shuttering their doors. Co-working had been a hot option for landlords seeking to transform tired office space, though some have put a break on those plans.

Regus, which went through a bankruptcy restructuring in 2003 after the dot-com recession, has put nearly 90 locations into Chapter 11 in the past couple of months. This week, the company filed for six locations in Manhattan, Brooklyn and Long Island City.

In a mid-year update from its parent company, Switzerland-based IWG, CEO Mark Dixon said “the firm will be accelerating its plan to trim 4 percent of its global portfolio in response to Covid-19.”

“Whilst the Covid-19 pandemic continues, we expect our third quarter to be particularly challenging,” Dixon said. “We therefore remain sharply focused on maximizing further cost savings in the coming months,” he wrote in the August report, noting the company is working to build a large cash buffer.

Most of the locations Regus put into bankruptcy are in urban centers such as New York, Chicago and San Francisco — which have been walloped by the virus. The number of centers in Chapter 11 represent about 2 percent of the 1,000 locations the company has in the United States and Canada.

Regus’s business model allows the company to insulate itself from the performance of individual locations. The corporate Regus generally is not a signatory nor a guarantor of individually-leased locations. Each location is set up as an independent LLC with contractual obligations to the Regus parent and the LLC is obligated to the lease.

When a location under-performs, the parent Regus can pull the plug on an individual location or push it into bankruptcy without corporate obligation. Throughout the country, various underperforming Regus locations are seeking reorganization in bankruptcy, attempting to renegotiate leases, weather the pandemic, and hope for a return to normal business occupancy levels.

There is more optimism for suburban locations. The company believes its clients will want to work in suburban offices closer to home, rather than in crowded business centers, which could spell opportunity for Regus in Rockland County, as well as Office Evolution in Pearl River. The Regus in Suffern, known as “The Point of the Mountains” for its spectacular views, has four co-working desks, 57 private offices and three meeting rooms.

Regus is the world’s largest flex-office company, with 10 times as many locations as WeWork. The company, founded in 1989, is being watched as a barometer for co-working. Nearly $13 billion worth of commercial-mortgage backed securities loans have exposure to Regus locations, according to a recent report from Kroll Bonds Ratings Agency.