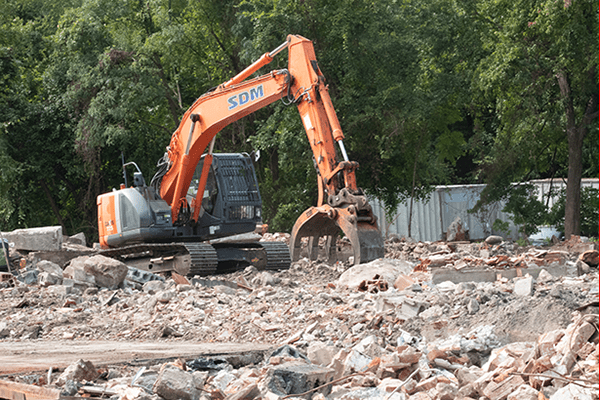 The Cohen family has finally taken a bulldozer to the former industrial site in Nanuet where their retail display business Azar International Inc. had been located for decades. The large pit of rubble will likely be a pot of gold as the coronavirus pandemic creates opportunity for Rockland County’s housing market.

Even pre-pandemic, the ample industrial site was a goldmine waiting to happen: Last June it was rezoned for housing and retail after the Town of Clarkstown created a “Transit Oriented District” or TOD alongside the NJ Transit hub in Nanuet.

After more than a decade of planning, Clarkstown last summer rezoned the heart of Nanuet’s business district into a cluster of dense residential housing and light commercial that is designed for walkability and train use. The 37-acre TOD, which is divided in three parts, caps housing units at 500. The original plan called for 750 housing units but was downsized to satisfy New York State Department of Transportation’s traffic concerns on state roads.

The Cohen family has razed the property, south of Prospect Avenue, which comprises 1.5 acres in TOD 1, which is designated for townhouses, or 20 units per acre, as well as a contiguous 3 acres situated in TOD 2, which allows for 40 to 50 housing units per acre plus 10 percent ground-floor retail.

Ben Cohen says the family razed the buildings because they were condemned and falling apart. But added, “We know about the demand and we’re exploring our options.”

Since the pandemic began, city dwellers have been making an exodus to the suburbs. Realtors say there is tremendous demand for both sales and rentals in the county and region. Sales agents say they are doing what they can to keep pace with market conditions that seemingly shifted overnight, and the toughest part is lack of inventory.

Prior to the pandemic, there had been a focus on creating housing for millennials and empty nesters in Nanuet, in a proposed TOD in Pearl River, and with a plethora of planned apartments and condos in Nyack, some of which have either been built or are underway. There is talk that a portion of the IRG campus, formerly the Pfizer campus, could be slated to become housing as well. Now, opportunity in the rental and condo market has expanded, real estate agents say.

Rockland County has typically competed with Westchester and Connecticut for apartment dwellers — perhaps more competitively priced but at a disadvantage for commuters who rely on the MetroNorth. With a shift to working from home — and uncertainty about the timing and widespread distribution of a vaccine — Rockland County’s profile as a place to live is elevated.

City dwellers have an eye cast on the county. Vacancy rate on rental apartments in Manhattan hit a record 3.67%, more than double the rate a year ago, according to the report from real estate firm Douglas Elliman and appraiser Miller Samuel. It was the highest level in the report’s 14-year history. Renters who lost jobs or have taken pay cuts are having a hard time affording their rent even though the median rental price in Manhattan, $3,378 a month, dropped by 4.7% from last month.

The Hudson Gateway Association of Realtors released a report in early April for the 1st quarter of 2020 showing Rockland County had a 15% increase in sales (452 units compared to 393 units in the first quarter of 2019), median sales price went up by 3.1%, and multi-unit sales were on the rise.

Development in the TODs would not come on line immediately but the pandemic has given investors an incentive to speed up plans.

In Dec., RCBJ reported that a national developer is in talks with both a landowner and the Town of Clarkstown to build 225 rental units in the newly zoned “Transit Oriented Development” in Nanuet. AvalonBay Communities, Inc. an equity REIT, was the first major developer to express serious interest in building a significant portion of the housing allotment in the TOD.  At the time the company expressed a desire to build larger units but new conditions might bring them back to the table.

“There’s a keen interest in rentals and sales in the area,” said Councilman Don Franchino. “We are in a good position to fill that demand.”