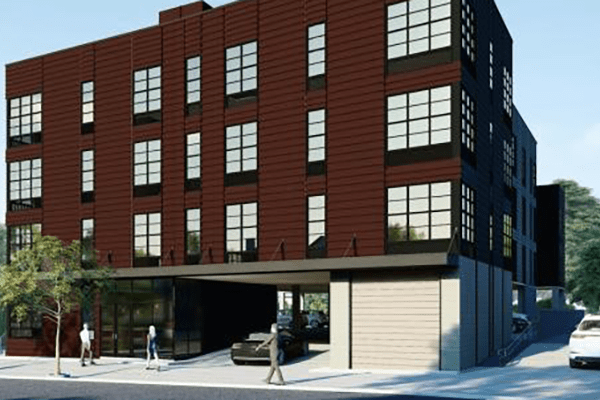 A proposed multifamily housing project site slated for Main Street in Nyack is up for sale.

Srima said JED Realty has another project outside the county they want to turn their attention to and would like to sell the Nyack property within the next few months. “If they get the price, they’re happy to let someone else build it,” said Scrima. “If not, they will do it themselves.”

The project would add to the growing boom of multifamily housing in the Village.

The property is located between Bethel Haitian Alliance Church and the parking lot for the five-unit Victorian Townhouse Condos to the east.

The project required permission for a subdivision to allow the merger of two adjacent lots. The project’s initial site plan, which was met with opposition from some Nyack residents, proposed driveway access onto Depew Avenue. The Village Board rejected this proposal and JED Realty reconfigured the plan traffic to flow in and out of the development via Main Street.

Nyack’s 2016 Comprehensive Plan calls for an increase in housing opportunities “that respond to Nyack’s changing population, including seniors and young adults.”  The plan says there’s a housing shortage in Nyack for affordable rental units that are walking distance from downtown shops and mass transit stops.

The Comprehensive Plan also calls for increased walkability, adding sidewalk amenities and the removal of curb cuts–none of which are possible with only Main Street access to this proposed project

The now-for-sale 26-unit project proposed for Main Street is just one among many that are in the cards for the Village.

Prior to the coronavirus pandemic, more than 450 new units were slated to be added to Nyack’s housing boom. The pandemic has created increased demand for urban flight – realtors report a significant uptick in interest from New York City dwellers.

Also built is Pavion Apartments, at the village’s southern border (Cedar Hill Avenue at Franklin Street), which is a market-rate 135-unit rental community with studio, one and two bedrooms.

The TZ Vista project renamed Tidewater on Nyack’s waterfront is slated to be a 128-unit condo complex in three multi-story buildings. The project is expected to break ground this fall. Tidewater will add access to a waterfront park to the Hudson River shore at the foot of Main Street, at Gedney Street.

The Montclare, underway at the northwest corner of Midland and Main, is slated to bring 48 rental units. Gateway Lofts, a 33-unit, four-story market-rate boutique apartment building with four-story, one- and two-bedroom units, is also underway on the corner of Route 9W and Main Street in Nyack.