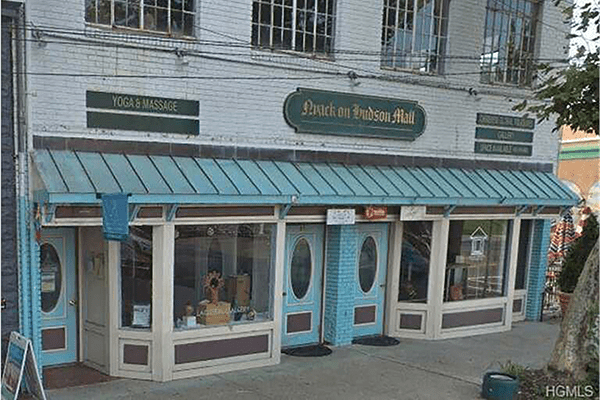 Former Birchwood Yoga Studio To Be Converted Into Five Apartments

Joseph Maraia, one of the developers behind the proposed Diana Place rental project in Nyack, says the coronavirus pandemic has waylaid plans to build the 26-unit multi-family building at 249-259 Main Street. Bogged down with two other buildings that have lost tenants, Maraia and Edward Mistretta, who formed the partnership JED Realty, have put the site up for sale for $2 million.

Like so many entrepreneurs who have spent years working toward a goal, JED Realty finds itself strapped by the unforeseen winds of a shaken economy and an uncertain future. At a critical moment of pivot-or-perish, the pair of developers who own two Nyack properties are rethinking how to maximize their current rent-producing assets while hoping Diana Place will find a buyer.

JED Realty owns the St. George at 48 Burd Street and 85 South Broadway. The beautifully restored Burd Street building, made up of eclectic office suites, is typically 100 percent occupied. Since March, occupancy has dropped by 20 percent.

“We’ve had four move-outs,” said Maraia. “Rarely is the building anything less than fully occupied. We’re starting to recover but the rent rolls have been affected by a few hardships.”

Even more severely impacted has been 85 Broadway, which lost The Birchwood Center, the long-time yoga studio that occupied the second floor.

“They moved out,” he said. “They’re not coming back. They had three years left on their lease.”

In addition, half of the ten businesses renting space on the first floor have moved out.

“We’ve lost 70 percent of the rent roll in the building,” said Maraia.

Rather than struggle to rent the building to commercial tenants, the pair have reimagined the second-floor space: they are reconfiguring the building to include five residential apartments. The former yoga space will be converted to three studios and two one-bedrooms that will benefit from high ceilings and great light. Maraia says he’s received project approvals from the Village of Nyack but is waiting on a building permit.

“Nobody is interested in renting yoga or dance space at this time,” the developer said. The apartments, ranging in size from 465-square-feet to 702-square-feet, will rent from $1,400 to $1,800 per month.

The developers are over-leveraged. Carrying the two rental houses on the would-be Diana Place project site, insurance, utilities and lawn maintenance is difficult while managing the transitions at the other properties.

Still the pair believe Nyack’s residential boom will continue, and Diana Place, which is being marketed by Redwood Realty Advisors, is an attractive opportunity. On July 6, JED received site plan and subdivision approval after three years before the Village boards. The project was slated to include five studios, 17 one-bedroom units, four two-bedroom units and 30 parking spaces. The plan includes two affordable units. The team spent more than $500,000 over three years to get the project approved.

The project required permission for a subdivision to allow the merger of two adjacent lots. The project’s initial site plan, which was met with opposition from some Nyack residents, proposed driveway access onto Depew Avenue. The Village Board rejected this proposal and JED Realty reconfigured the plan traffic to flow in and out of the development via Main Street.

Nyack’s 2016 Comprehensive Plan calls for an increase in housing opportunities “that respond to Nyack’s changing population, including seniors and young adults.”  The plan says there’s a housing shortage in Nyack for affordable rental units that are walking distance from downtown shops and mass transit stops.

The Comprehensive Plan also calls for increased walkability, adding sidewalk amenities and the removal of curb cuts–none of which are possible with only Main Street access to this proposed project

“People like action, accessibility to restaurants and shops,” Maraia said. “Nyack provides that. It’s got a vibrant population that cares about social issues and it has a feeling of purchase. With everything that’s going on with COVID and fear of living in the city, Nyack is going to be an attractive option.”