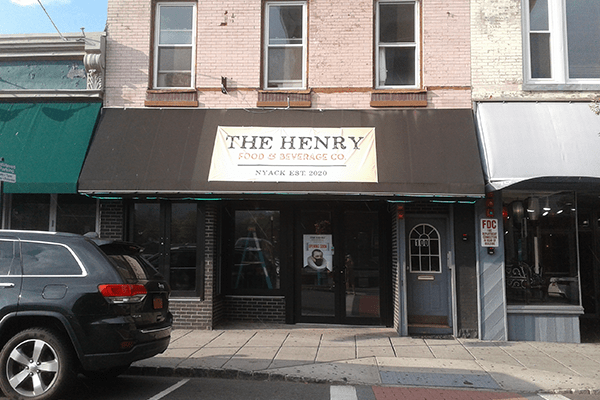 Countless restaurants have fallen victim to the coronavirus pandemic, including more than a handful in the Village of Nyack. But one restaurateur – young but seasoned and confident – has forged through a scorched season of sorrow and will open the doors to Nyack’s newest eatery on Thursday.

The Henry, an upscale sports bar with comfort food, is a comfort itself at a time when the village has witnessed the loss of Joe & Joe Nyack, ODs Tavern, The Pie Lady, Johnny Cakes, J Petal, and AJs Crab Shack & Bar. For now 8 North Broadway is closed.

A nod to the great explorer Henry Hudson, The Henry, co-owned by Travis Koester, Tyrone Azanedo, and Don Ryan, the restaurant too is hoping to navigate uncharted territory brought on by the uncertainties of the COVID era. A time when restaurants must pivot to persevere, adapt to half capacities, cater to skittish customers, embrace the concept of “to-go” — even if that’s not what the restaurant concept had intended to be.

Koester and his partner started talks with the former owners of Karma, the restaurant/nightclub back in January – when the economy was humming and Nyack had fully positioned itself as a “restaurant town.” Koester, 34, who lived in Nyack at the time (he’s now moving to Upper Nyack) opened The Local Tap House six years ago and is a partner in Two Villians Brewing, which opened last November. The partners of Two Villians, The Local, and Maura’s Kitchen are a loose network of rainmakers who’ve helped build Nyack’s foodie image.

By March, Koester understood the gravity of the pandemic. In April, he restructured The Local, a craft beer and bourbon hangout into a to-go business selling cocktails and canned craft beer. He projects a 25 percent decline in revenue for 2020 but says agility is what was needed to save his business.

“Without to-go, we would not have made it,” said Koester. “This is true for every business but especially restaurants.” The same was true for Two Villians, which at first opened a pop-up bodega selling basics but made a more strategic move to selling home-brewed beer in cans sold in four packs.

Even while the world was collapsing, Koester pushed forward with his plans to open The Henry.

“I’m a firm believer in taking risks,” said Koester. “This has been a catastrophic year but there’s always a place for concepts like The Henry.” Koester says he’s had a bit of luck on his side: flexible landlords. “Landlords have worked with me,” he said.

With restaurants operating at 50 percent, The Henry will seat 70 people between the main floor and the loft. The partners have revamped the dark, clubby space into bright, light-filled farmhouse environment with new floors, more exposed brick, whitewashed paints and pendant lighting.

The Henry will serve upscale bistro fare – with entrees averaging $15 – but the food will be “to-go” ready because patrons are still interested in taking out, and more importantly Koester says, must be prepared for a second wave of the virus.

“To-go and delivery are the only real pivots restaurants have during COVID,” he said. “We are keeping our menu flexible. It needs to be ready to be put in boxes and pushed out the door.”

Like nearly every business, particularly those who’ve gained ground by popping up tents and operating from the street, Koester is worried about the onset of colder weather. He says Nyack’s fortnightly open-air pedestrian Fridays have helped the village but hopes that come the spring, the Village will make this a more regular event.

“The thought of winter is terrifying, but I think we will make it work,” said the restaurateur. “If we have another shutdown, we have systems in place to adapt. People who’ve already survived are stronger. Those who haven’t pivoted, don’t have the tools. I feel we’re equipped to make this work.”