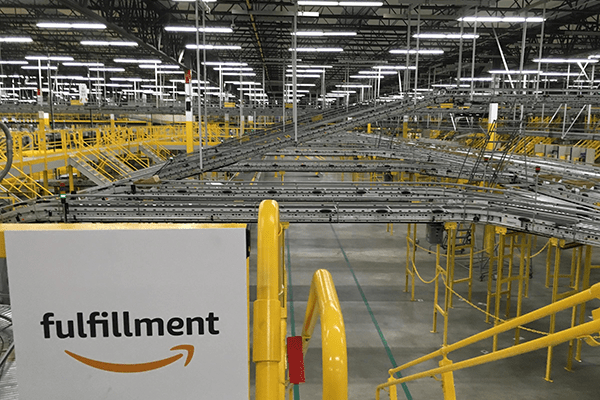 Rockland County is going to benefit from Amazon’s explosive growth and the company’s need to expand its distribution network in the tri-state region.

Amazon Logistics plans to open delivery station facilities at Hudson Crossing Industrial Park in Blauvelt this fall to power its “last-mile capabilities to speed up deliveries for customers in Rockland County.” Amazon fulfillment centers send packages to delivery stations, where they are sorted and then loaded into vehicles for delivery directly to customers.

“We are excited to continue to invest in the state of New York with a new delivery station that will provide efficient delivery for customers, and create hundreds of job opportunities for the talented workforce,” Amazon spokeswoman Emily Hawkins said in a statement.

Those full-time and part-time jobs will pay a minimum of $15 per hour, according to Amazon.

Amazon intends to grow its “network square footage” — the space taken up by its fulfillment centers, grocery stores, offices, and other physical space — by 50 percent this year. A lot of that expansion will go to the locations Amazon uses to sort and deliver packages.

In 2019, the company increased network square footage by approximately 15%.

This year’s projected growth includes new fulfillment center space as well as sort centers and delivery stations. Most of this space will open in late Q3 and into Q4.

Amazon has been investing in transportation and fulfillment network for years, spending some $3 billion in 2019 to power one-day Prime deliveries. Most of Amazon’s fulfillment network is positioned at the outskirts of major metropolitan areas, balancing affordability with easy access to Prime customers’ doorsteps.

Amazon saw more orders in the second quarter of 2020 than in the fourth quarter of the previous year: More people bought from Amazon between April and June — typically a mediocre season for retail — than they did during the shopping bonanza of November and December, Amazon CFO Brian Olsavsky said.

Whether that online shopping surge will continue apace remains uncertain but Amazon expect demand to continue.

Onyx, which is headquartered in Woodbridge, New Jersey, acquired the Blauvelt industrial park last year, according to a statement from CBRE, which was the firm’s broker on the Amazon lease.

Amazon is ramping up its fulfillment capabilities due to the surge of online shopping demand created during the coronavirus pandemic shopping online. That footprint expansion has been particularly apparent in the New York metropolitan area, which has a dense population that needs to be served.

Amazon plans to locate a delivery station that would include more than a half million square feet of parking in Queens, New York, at the Grand Logistics Center, a five-story structure at 55-15 Grand Ave. In the second quarter, Amazon signed a lease for a 953,595-square-foot facility at 343 Half Acre Road in Cranbury, New Jersey. And earlier this year, Amazon said it had leases to open 14 delivery stations this year in New Jersey.

Delivery stations enable Amazon Logistics to supplement its delivery capacity and flexibility, according to the company.

These stations also offer entrepreneurs the opportunity to build their own business delivering Amazon packages, as well as giving “independent contractors the flexibility to be their own boss and create their own schedule delivering for Amazon Flex,” the company said.

Since acquiring the property last year, Onyx Equities has seen pent-up demand for space along the lower New York State Thruway corridor,” Matthew Flath, the firm’s vice president of asset management, said in statement. “A variety of firms seeking warehouse, showroom and last-mile delivery locations have shown considerable interest in the limited number of large blocks available at Hudson Crossing, and the New York State and Rockland County IDA [industrial development agency] incentives that they may be eligible for.”