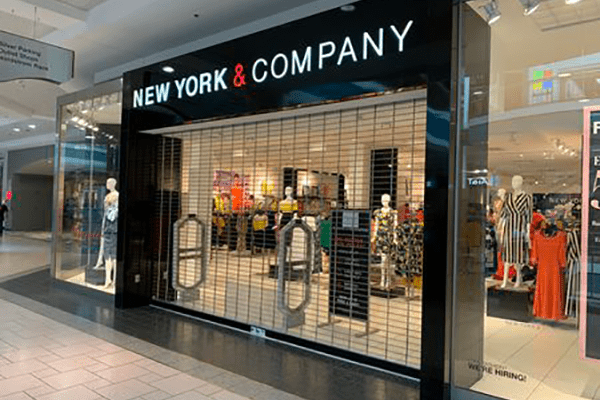 New York & Co. parent company RTW Retailwinds has filed for Chapter 11 bankruptcy protection and plans to permanently close most if not all of its stores, which may include the location at the Palisades Center.

The company said it has already begun its liquidation sales, with about 92% of its bricks-and-mortar locations having reopened after the coronavirus shutdown. The company is evaluating selling its e-commerce operations and related intellectual property in bankruptcy proceedings.

RTW Retailwinds joins a growing list of retailers that have filed for bankruptcy during the Covid-19 crisis. Other victims include Neiman Marcus, J.Crew, J.C. Penney, Brooks Brothers and Lucky Brand.

“The combined effects of a challenging retail environment coupled with the impact of the Coronavirus pandemic have caused significant financial distress on our business, and we expect it to continue to do so in the future,” RTW Retailwinds CEO and CFO Sheamus Toal said in a statement.

“As a result, we believe that a restructuring of our liabilities and a potential sale of the business or portions of the business is the best path forward to unlock value.”

RTW Retailwinds operates 378 retail and outlet stores in 32 states. In addition to New York & Co., some of its other brands include Fashion to Figure and Happy x Nature.

The company on June 3 had already warned there was “a substantial doubt” about its ability to continue operating viably, saying a bankruptcy filing was “probable.” It also warned at the time it might be in default of a loan agreement with Wells Fargo.

RTW Retailwinds has been pushed into a state of organizational chaos. The retail company recently eliminated approximately 50% of its corporate workforce. In April, half its board of directors, including its CEO-elect, resigned. Its current merchandise stock, piled up within locations closed by COVID-19, has become outdated and declared “significantly impaired” by the company. RTW Retailwinds also missed two important July loan repayments towards its $40 million obligation with Wells Fargo. Monday’s bankruptcy filing was inevitable.

Over the last two decades, Lerner Shops, a popular shopping destinations for generations morphed into the New York & Company stores but now a Monday bankruptcy filing brings an end to a piece of American retail history. Lerner was founded in 1917 as a New York City blouse shop. By 1920, 23 Lerner Blouse Shops were in operation. Within ten years, that figure grew to 160 units in 37 states.

When Limited Brands purchased Lerner in 1985, it breathed new life into the apparel store. The Lerner name still had strong name recognition but its clothing line had gone down market. Owned by Les Wexner, Limited Brands, was the parent company of The Limited, Henri Bendel, Victoria’s Secret, and Lane Bryant. Wexner reexamined the Lerner store’s image and updated its merchandise mix. His changes returned Lerner to profitability for the first time in several years.