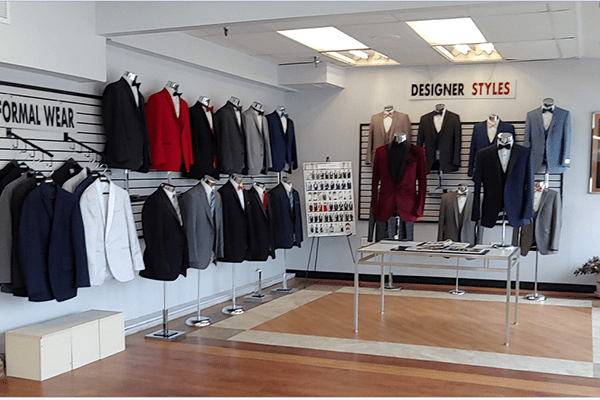 The multi-generational Michael’s Tuxedos in Nanuet has been dressing grooms and graduates for more than 40 years. Though decades usher in sartorial changes, the tux rental remains a staple for special occasions – and business at Michael’s Tuxedos by Dante Zeller has hummed along successfully. Even steep downturns in the economy, like the 2008 recession that suppressed spending and changed the tone of corporate festivities, only temporarily impacted Michael’s.

In 2019, however the company suffered a significant but not fatal blow when it was forced to relocate from its “glass box” on Route 59 to a more obscure location at 78 South Middletown Road after Brixmor Property Group, owners of Rockland Plaza, announced plans to tear down the free-standing building to make way for two fast-food restaurants, Shake Shack and Chipolte.

But now – amid a universal health crisis that has turned every norm upside down and people’s lives inside out – the owners of the tuxedo shop are preparing for a return to normal while bracing for a world that has nothing but uncertainty.

Since closing in mid-March during New York State’s-enforced lockdown, Michael’s lost graduation and prom season, which typically accounts for 70 percent of its annual revenues. Spring and early summer weddings were cancelled.

Michael D’Amato, who runs the store, says COVID-19 was an especially ill-timed blow because the store had just begun recovering from the negative impact of its relocation.

“By spring 2019, business was down 20 percent because we no longer had the high-visible location,” said D’Amato. “We had loyal customers and good relationships with the high schools but once we were off the main highway, the traffic wasn’t there.” Slowly business at the Middletown Road location, which at 2,500 square feet is double the size of the original, began to perk up.

“By late fall, we were seeing bookings on the rise again,” said D’Amato. “We were looking forward to the spring of 2020.”

The coronoavirus pandemic had other plans. Not only was graduation a bust, but weddings were cancelled in droves. Over the past four months of closure, D’Amato weathered the storm, negotiating favorable rental terms with his new landlord, furloughing his three employees, and communicating with customers to cancel or postpone special occasions.

Now, like so many small businesses, the challenge ahead is to assess how consumers will behave in a world with restrictions and social distancing. D’Amato says there’s pent-up demand. People want to plan weddings but when and how restaurants, catering halls and other venues will open and be functional remains murky.

But nothing is written in stone.

“Last week New Jersey was set to reopen indoor dining with limited capacity and that was postponed and there’s no date set to reopen indoor dining in New York,” said D’Amato. “If venues don’t open by the end of August, we’re going to have to rethink this. Unless government is willing to give us grants and support small businesses we won’t survive. You can’t have all these restrictions in place and not help small businesses.”

While many small businesses have taken PPP loans, it’s not enough, D’Amato added.

“Unless government is willing to give us grants and support small businesses we won’t survive. You can’t have all these restrictions in place and not help small businesses.”

Gov. Andrew M. Cuomo last week announced that shopping malls — previously on an indefinite delay — can reopen outside of New York City if they are equipped with ventilation systems that block the virus from circulating. Also under Phase 4, film and television production can resume, along with activities on college campuses and professional sports, minus the fans.

However, bowling alleys and gyms are still closed subject to further review by Cuomo and medical experts.

Catering halls reopened but only for events with 50 or fewer people, according to a spokeswoman for Empire State Development, the state’s primary business-aid agency. Restaurants and food service had been part of Phase 3, but on July 1, New York City Mayor Bill de Blasio and Cuomo announced NYC would not reopen indoor dining.

New York, many believe, has put the worst of the virus behind itself but the country is still raging with coronavirus outbreaks and there is not yet a vaccine in sight.

D’Amato, in his 50s, has only ever worked in the tuxedo business. His grandfather, an Italian immigrant who founded the business in the 1970s, grew the empire to include more than 30 locations in the tri-state area. Over the years, the company downsized to a location in Verona, New Jersey and Rockland.

“My father was in the construction industry but I grew up in tux business,” said D’Amato. “This company is our legacy. “It would be a shame to lose our family business over something as bizarre as this virus.”