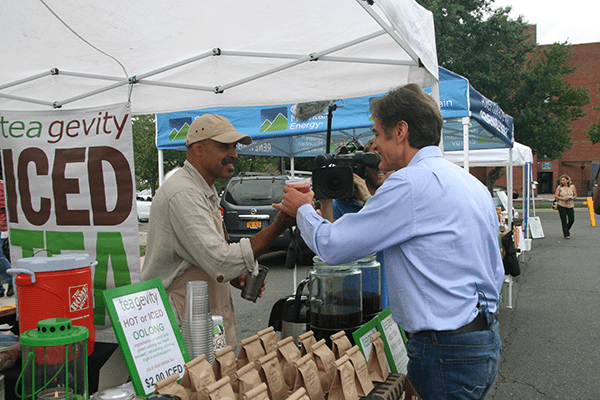 Preston Powell firmly believes in taking it to the streets.

From day one eight years ago, at a table set up on Nyack’s Main Street, Powell has been selling blended loose leaf tea from his tables under a tent. He’s built Teagevity, a notable Hudson Valley business, through years of consistency at area farmers’ markets, and now he is the first vendor to stake his flag at the foot of the newly opened Shared Use Path on the Rockland side of the Mario Cuomo Bridge at the South Nyack Landing.

“My philosophy for doing business is the ‘pop up’,” said Powell. “I like to hit the street, go direct to the consumer, I like to keep it lean.”

Turns out that guiding tenet has been good for growing a business organically by adding new markets and expanding Teagevity’s product line over the years. He has never been tempted to set up a brick-and-mortar shop, nor to peddle his wares to other retailers. The pop-up model, it turns out, has shielded the company against the collateral damage being felt among so many small businesses that have been unable to open and operate during the protracted coronavirus shutdown in New York. Throughout the spring, Teagevity continued to sell at farmers markets that accommodated social distancing. And the company trickled into the direct-marketing space by encouraging online orders that were delivered by truck or via the post.

Teagevity, a family affair run by Powell’s wife Trang, and their two teen children, began vending at the Nyack and Irvington markets. Four years ago, the company’s fortunes lifted when Powell was accepted to the Pleasantville Farmers Market – the most substantial market in the Lower Hudson Valley.

“I didn’t really think I had a chance,” said Powell,” citing the competitive nature of being accepted to Pleasantville. “But I always try so I put in an application. I got a call the next day. They were excited about having a tea merchant. I had to audition to their board.”

Powell, the grandson of the late Congressman Adam Clayton Powell Jr., viewed acceptance to the Pleasantville market as true validation for the path he was on. Five years prior, the tea seller owned a nightclub in Sag Harbor, Long Island. He was managing reggae bands, and splitting his time between Long Island and Martha’s Vineyard. Then, at 56, he wanted a fresh start, a less stressful path. He’d been balancing his high-octane life with herbal teas and martial arts.

He moved his family to Nyack, opened a nonprofit martial arts studio, and did not balk when his wife suggested he sell the tea blends he’d learned to make over the years. Teagevity sells more than 150 varieties of bagged loose leaf tea – oolong, black, white, green and herbals – including a dozen by the cup at four markets (including Ramsey New Jersey) and the South Nyack Landing. In recent years, the tent got bigger with his wife’s coffee line, Bean Love.

For the farmers markets, which run Thursday through Sunday, Powell wakes up at 1 am to blend and brew teas in his home-based commercial kitchen in order to be ready for the 8:30 market openings. The family splits up when markets fall on the same day. Now he’s puzzling over how to keep the markets going while vending at the bridge landing – particularly because he has the option to be there from 6 am to 10 pm.

For the first week, Powell manned the Teagevity tent at the South Nyack Landing from dawn to dusk, saying it’s been a thrill to see so many walkers and bikers visiting the Hudson Valley’s newest attraction. “I’ve met people from as far away from Canada who were curious to experience the path,” he said. “But we’re still trying to figure out the traffic patterns. And we’re waiting for signage.”

And though he’s expecting to be joined by food trucks, none have shown up so far.

“It’s a longer day than the farmers markets,” he concedes, adding the markets are short and fast-paced. But the opportunity to be seen by thousands of path users, not to mention cars riding by, is an opportunistic way to build his brand.

One day during the first week at South Nyack Landing, Powell was caught in a driving summer storm. His tent had a Wizard of Oz moment. He realized he wasn’t in Kansas anymore — he had to do something about the elements. Powell ordered military weights to fortify his tent. “This is hard work,” he said. “This is what separates the boys from the men.”

And so, while Powell is vending a healing, peaceful salve for life’s tribulations the gritty tea merchant hits the streets, adapts to the conditions, pivots for a pandemic, and builds a legacy that is teaching his kids the meaning of hard work and rewards.