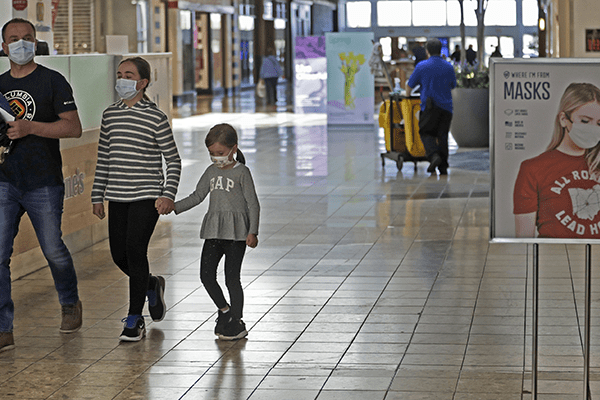 Will Retail/Restaurants Rebound Amid Consumer Fears?

Retail sales in the U.S. plummeted 16.4 percent in April, for the largest two month decline, according to the Commerce Department. That followed an 8.3 percent plunge in March.

The April data could show where the bottom is, though March stats were aided by panic buying and hoarding, plus most stores remained open for the first half of the month.

Total sales for April, which include retail purchases in stores and online as well as bars and restaurants, were the lowest since 2012, without accounting for inflation.

Most states have begun to lift stay-at-home orders, including New York, which has opened up five regions. Rockland County is still under restrictions, however. As stores reopen, there’s evidence of some pent-up demand. But apparel retailers must brace for a post-pandemic environment in which consumers are both skittish about enclosed spaces and have been economically hard-hit by layoffs.

The downturn has accelerated what may have been inevitable. J. Crew and Neiman Marcus have filed for bankruptcy protection, and retailers like J.C. Penney are expected to follow. Retail, which is the nation’s second-largest private-sector employer, cut 2.1 million jobs in April. Of those, 740,000 lost jobs at clothing and clothing accessories stores and 209,000 at furniture and home furnishings stores, according to a report released by the Bureau of Labor Statistics. General merchandise stores, which include warehouse clubs and supercenters, actually gained 93,000 jobs, the government said.

The Commerce Department’s report on retail sales for April shows the hardest hurt were restaurants and bars, furniture stores and clothing stores. Clothing stores have seen sales fall by 89 percent since February, revealing how dependent retailers are on brick-and-mortar stores. Increased internet sales did not come close to offsetting overall declines.

Restaurants and bars have lost half their business while furniture stores report sales off by 66 percent.

The COVID-19 pandemic has wreaked havoc on the economy but mall traffic had already been steadily declining, with vacancies rising and rents diminishing.

At 9.7 percent, the national mall vacancy rate in the first quarter, according to Moody’s Analytics Reis, is the highest in a decade. Average mall rent in the period did rise 0.5% from the fourth quarter, to $44.08 per square foot. That’s a 1.7% year-over-year increase, or 3.6%, cumulatively, over the last three years, according to Reis’ report. That’s true in part, however, because in many areas, rent is propped up, not by thriving retailers, but by self-storage or entertainment venues like trampoline parks that have taken over what once were retail spaces, the firm said.

Now, as retailers and mall owners begin reopening, there is no true playbook for a “new normal”, and while new safety precautions are being instituting, many retailers will have trouble thriving or may not open at all.

Several chains, including the brands at Gap Inc., L Brands, Urban Outfitters, Francesca’s and others, have told landlords they wouldn’t be paying rent, at least for April and in some cases beyond.

Both mall owners and their tenants want to get back to business, but the pandemic continues to complicate that. With the outbreak showing signs of easing in some areas, and political pressure to salvage the economy, many malls and nonessential stores are opening back up. The disease remains a threat, however, so that requires new protocols.

Macy’s also announced plans for a phased opening with similar limits. Macy’s, which had already slated 125 locations for closures over the next three years, last week hinted that there could be more in light of COVID-19. Nordstrom announced the permanent closure of 16 stores nationwide. Lord & Taylor, which has already closed down its Palisades Center location, is reportedly preparing to liquidate all stores, and, with J.C. Penney and Neiman Marcus, is likely to go bankrupt. Hundreds of Sears stores are already gone.

Not only are stay-at-home orders still in place in many areas, but most shoppers (89 percent) also remain anxious about shopping in physical spaces, according to research from e-commerce payment solutions company Fast. The top worry for 63 percent of survey respondents is being too close to other people, 40 percent are most concerned about store cleanliness, with 34% leery of touching point-of-sale terminals and 32 percent of handling cash.

More than 60 percent of Americans are worried about lifting restrictions too quickly, with only 29 percent concerned about not reopening quickly enough, according to a May 5 Monmouth University poll. A third want to move to ensure the economy “does not go into a deep and lengthy downturn​,” but 56 percent say public health concerns are more important in deciding when to end the current limits, according to that report.