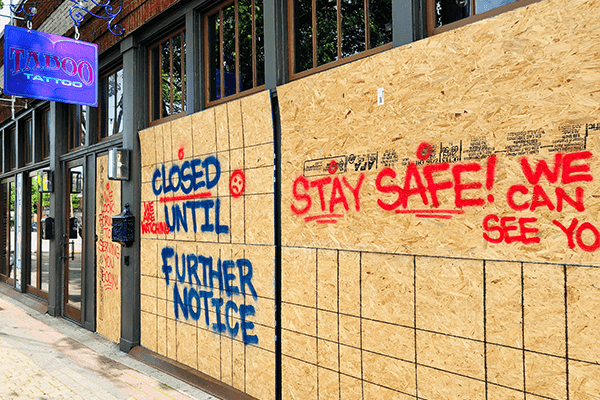 U.S. retail sales and factory output posted historic declines in March, and other figures showed that the worst is yet to come.

The value of overall retail sales fell 8.7% from the prior month, the biggest decline in records dating back to 1992, according to Commerce Department data released Wednesday. Federal Reserve figures showed U.S. factory output dropped in March by the most since 1946, just after World War II ended.

This is the worst sales decline in decades, if not ever, as the U.S. Department of Commerce’s preliminary results translate to a 6.2% year over year decline, to $483.1 billion.

There’s one bright spot in the economy: Food and beverage stores posted a record 25.6% surge as Americans stocked up on essential goods. Sales rose at health and personal care stores, general merchandise stores and nonstore retailers. In contrast, clothing stores’ sales fell by half, while restaurants and bars were down 26.5%. Spending on cars and car parts fell more than 25 percent in March, seasonally adjusted. Sales at gas stations, depressed by low oil prices as well as reduced commuting, fell 17 percent.

Economists say March saw a boost in spending on groceries, health products and home improvement – all things that helped support retail sales. They do not expect to see a repeat performance in April.

Amazon posted strong growth — fueled by its move toward one-day Prime shipping — as the e-commerce giant and the whole online sector continue to grow and gain market share. Nevertheless, e-commerce growth overall was down considerably from a year ago, and January marked the first time since December 2018 that e-commerce didn’t lead other retail sectors in growth.

The data from March, a month when most stores were still open, is harrowing, especially in key categories. Year over year, apparel sales fell 52%, furniture sales fell 28.6%, sporting goods fell 23.5% and electronics fell 14%. And, while some sales moved online, that’s been “nowhere near enough to offset the declines in stores,” according to Neil Saunders, managing director of GlobalData Retail.

Total sales, which include retail purchases in stores and online as well as money spent at bars and restaurants, have been unprecedented. But that steep decline doesn’t even account for the full damage of the economic standstill. Most states did not shutter nonessential businesses until late March or early April, meaning more pain is ahead. The month was also defined by millions of layoffs, which have continued into April, and sharply reduced spending power.

And retail was already on shaky ground. February retail sales missed expectations before the outbreak of COVID-19 began to take its toll on retailers. In January, consumer spending help up, which swill boost retail’s first quarter averages but will not be an indicator of what’s to come.

Surveys in April look even worse, with manufacturing in New York State and sentiment among U.S. homebuilders plummeting by previously unthinkable amounts. And even if the economy does reopen slowly, how quickly will spending bounce back? People who’ve lost their jobs won’t have any significant discretionary income. Those who are financially intact may feel skittish about going to the mall or to restaurants.

Likely, we are looking at a long-term recovery, with an unknown outcome for many businesses. JPMorgan Chase & Co. said it continues to expect a 40% annualized decline in gross domestic product in the second quarter.