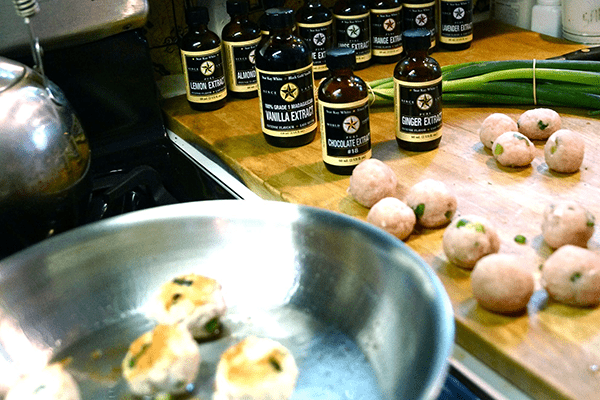 Star Kay White, a Congers-based flavor manufacturing firm that nearly defected to Orange County three years ago, is today celebrating an expansion and renovation at its existing facilities at 85 Brenner Drive with a ribbon cutting.

The 1,700-square-foot expansion to its 40,469 square foot building at 85 Brenner will add an enclosed building to house eight stainless steel tanks for materials such as sugar, water, flour and other ingredients used in the manufacture of flavoring and extracts.

Star Kay White, founded in New York City in 1890 by David Katzenstein on Valentine’s Day. Today, the company is 4th and 5th generation owned by Ben Katzenstein, and his sons.

The company relocated to Rockland County in 1984 and has grown over the decades to be a success story. The addition and renovations will add 21 jobs to the company’s workforce of 118.

“Star Kay White has been a fixture of Rockland County for over 30 years, and I am thrilled to see them continue to invest in our community,” said County Executive Ed Day. “Fostering expansion and job creation is the proper role of government and I am thankful for the team effort that led to this much needed infrastructure upgrade that will lead their company into the future.”

Star Kay White, described by some as a “Willy Wonker” factory, manufactures extracts—vanilla, chocolate, cinnamon, peppermint, almond, to name a few—and flavorings, such as chocolate chip cookie dough and mocha, that are distributed to ice cream and candy manufacturers worldwide.

German immigrant and flavor chemist David Katzenstein, together with his brother Sam, started the “Star Extract Corporation” in 1890 at the corner of West Broadway, Greenwich Street and Fulton Streets in New York City. Barely surviving the Great Depression, the now renamed Star Kay White began to thrive as David’s sons Miles and Carl came on board. Miles demonstrated an aptitude for flavor chemistry; the company used many of his flavor inventions and processing designs for decades. When the company moved to Rockland County in 1984 it doubled in size from 15,000 square feet in the Bronx to 30,000 in Congers, and has since expanded three times.”

Star Kay White needed a rear yard variance and extra parking from the Town of Clarkstown to complete its expansion.

In 2016, Star Kay White Inc. of Congers planned to relocate to Orange County and build a 100,000-square-foot manufacturing facility at the former Mid-Orange Correctional Facility at the Warwick Valley Office & Technology Park. Empire State Development had at the time awarded the company with a $2.6 million CFA grant (The firm has applied for $4.1 miliion). But original project estimates of $20 million to build the facility were grossly underestimated. When Star White learned the project would cost double the amount, they’ll pulled out.

At the time, Katzenstein said that he was not willing to let the company go bankrupt.

The change in heart has been a relief for Rockland County, which recognizes Star Kay White as one of the county’s most successful manufacturing stories – both in terms of its lore but also for its continued expansion and job growth.