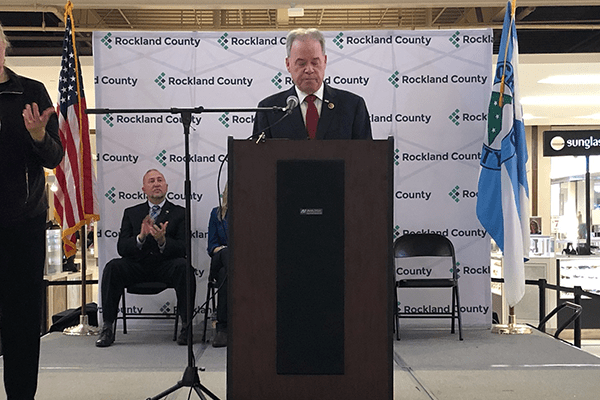 County Executive Ed Day used his bully pulpit during Thursday’s State of the County address at The Palisades Center to advocate for a resolution on the mall’s deadlocked efforts with the Town of Clarkstown to build out an unused portion of space on the fourth floor.

“Over the last few years, the Palisades Center has been proposing a much-needed internal enhancement, the use of space that already exists,” said Day. “The benefits to building out the existing space are significant to remain competitive in a changing economy.”

EklecCo NewCo, the Delaware-based LLC that owns the Palisades Center, and the Town of Clarkstown argued before a panel of judges last month at the United States Court of Appeals for the Second Circuit over the mall’s desire to expand. The 1.85 million square foot mall needs town and voter approval in order to build out the space.

While the legal wrangling drags on, Clarkstown town officials have been unwilling to hold a public referendum to decide the issue. Back in 2002, voters overwhelmingly said no to the mall’s expansion after the town held a referendum to release the mall from the “Restrictive Covenant,” that prohibits expansion.

The Palisades Center is trying to eliminate the restrictive covenant in both the courts and in private negotiations with town officials. The mall is not in favor of giving voters the right to decide the issue.

The Palisades Center, which wants to build out 240,000 square feet of unused space, is arguing Clarkstown has set up illegal obstacles while the town maintains the lower courts correctly dismissed previous challenges. The Palisades Center in June lost its federal claims in district court where it argued that the restrictive covenant forbidding expansion of the mall without a public referendum violated the center’s 1st and 14th amendment rights.

“We cannot allow the court system to rule on a decision that should rightfully be made here locally,” Day said, addressing a packed audience. “I am once again imploring the parties involved to sit down at the table and find a way forward that benefits both the Palisades Center and the residents of Clarkstown and Rockland County.”

Day added the county is not directly involved in the process but made it clear where his sentiments lie: “Tonight we are standing in the heart of Rockland’s economic engine,” Day said. “In 2019, the Palisades Center paid $21.4 million in property taxes and generated over $22 million in local sales tax revenue. Their contributions to our community cannot be overstated.”

Day said building the new space would generate 700 construction jobs, 500 new jobs in retail, entertainment and food, and would bring in $5 million in taxes.

However, in 2020, with a moratorium lifted, the Palisades Center will be able to challenge its property taxes. In 2013, the center successfully challenged its assessment, costing the town, county and school district $20 million. Clarkstown bonded its share of the settlement. The school district used its reserve funds.

The Palisades Center is in the throes of a changing retail environment – one that is demanding a rethinking of the use of space. Chains are going dark, department stores like Lord & Taylor and J.C. Penney, two of the mall’s anchors, have closed. Bed, Bath & Beyond’s Palisades Center location is leaving. Malls nationwide are turning to experiential entertainment, housing, hotel and convention space, to regain their economic viability. The Palisades Center has alluded to wanting to use the fourth floor for entertainment – though nothing specific has been floated.

Day also pointed out the importance the mall plays to tourism, one of the county’s key engines. The Palisades Center is the county’s top tourist destination, attracting 24 million annual visitors.

According to the Tourism Economic Study from New York State, tourism accounted for 7.1 percent of all employment in Rockland and generated $30.4 million in local taxes. The county’s international tourism campaign, mostly targeted to China, contributed to a 33% increase in hotel room nights compared to 2018. How the recent coronavirus pandemic will affect the going forward is yet to be determined.

The region’s leisure and hospitality sector grew over 5% – the strongest year-over-year December growth since 2001, evidence of the strength of Rockland and the Hudson Valley’s tourism industry. Day mentioned the county’s newest hotel, Element, due to open next month at the Spring Valley Marketplace. Day also gave a shout out to Rockland’s growing craft beer industry, the newly opened Two Villians in Nyack, as well as coffee roasters Stack Street Coffee and Java Love, and the county’s first hard cidery, Cider Works at Van Houten Farms.

Filming in the county has brought an economic boon, as well as visibility to the county with production of shows and movies including Orange is the New Black, Ray Donovan, The Sinner and The Irishman.

ROCKLAND COUNTY IS IN GOOD HEALTH

“It is with great pride that I can report to all that the state of our beloved County is strong,” said Day.

In 2014, the county had a 138-million-dollar deficit. Today it has a $32.2-million surplus. “Back then, we were the most fiscally stressed county in New York and now we have been removed from the New York State Comptroller’s fiscal stress list.”

Day says his administration has brought in $8.4 billion in ratables.  The unemployment rate is 3.5%, the lowest in the Hudson Valley Region, and lower than the statewide and national rate of 3.9%.

“We are focused on improving and expanding the already successful industries we play host to: advanced manufacturing, data-tech, biomed and hospitality and tourism,” said Day.  “These are the areas that are doing well and will continue to grow with our new integrated approach to foster expansion and job creation.”

Further, Rockland has secured ten consecutive bond upgrades since 2014, going from near junk bond rating to “A” ratings. Upgraded ratings allow the county to borrow money to fund capital projects at lower costs. For the second year in a row Rockland County had grown its Unassigned Fund Balance in the General Fund.

Recapping a six-year turnaround, Day said the county took out a bond to pay down the $138 million deficit fund balance in 2014, which costs the county $13 annually through 2024.

“Everyone said we would need double digit tax increases every year just to make those payments,” said Day. “We proved them wrong. To establish a healthy budget, we must continue to build our surplus and rebuild our undesignated fund balance. The NYS Comptroller recommends that we have a fund balance of approximately $56 million to be a truly fiscally healthy county.”