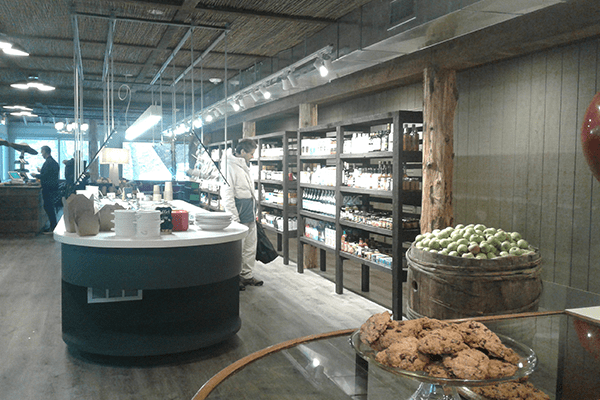 The unstoppable Michael Bruno is at it again. The real estate visionary who’s brought cache and a new era to Sloatsburg, continues to expand his footprint with a food market, a restaurant, a screening room, an art gallery, and an antiques center/real estate office hybrid a couple of miles north in Tuxudo.

Last week, the Valley Rock Mountain Market: Café & Provisions, a market and café selling hot food, takeout and carefully curated provisions including fresh baked goods, granola, cheeses, herbs and spices, opened on Route 17 in a 2,800-square-foot 1910 building that Bruno had been using as a bike shop but was formerly a bank. On a rain-drenched Saturday, patrons were sampling the mushroom lasagna and grilled cheese in the pleasingly appointed woodsy space that feels like a hip Adirondack pit stop. The market is attached to the 24-hour gym and is downstairs from the screening room for films and lectures that Bruno plans to open by spring.

The market, which seats 40, and is open seven days a week from 6 am to 8 pm is next door to The Village Blend, a coffee and pastry shop – one of the few independent businesses amid Bruno’s holdings.

Valley Rock Inn, opened less than two years ago, lures New York City hipsters, as well as Hudson Valley and tri-state area folks, who are seeking upscale amenities at the foothills of Harriman State Park and its 70,000 forever wild acres. The resort, adjacent to the train line, is a popular destination for weddings and boot camps. Bruno’s urban oasis began several years ago with the purchase of an old barn amidst a swath of fallow property. Then he bought another building, and another until a seedling of an idea morphed into a $6 million purchase of 15 acres with a dozen buildings. A string of old houses have been restored to create an inn, and Bruno continues to rehab everything that’s been left over from an earlier era.

Valley Rock Inn’s long-awaited restaurant The Lodge, is slated to open this week. It will operate Thursdays through Sundays for dinner, and serve brunch on weekends. Many people have come to know Valley Rock Inn through the Saturday gatherings of wood-fired pizzas served at the outdoor bar and restaurant. During winter, with tall heaters blazing, the culinary spot steals a page from an apres-ski scene.

Only within the past two years has Sloatsburg, population 3,100, hooked up sewer. Talks are underway to upgrade and beautify sidewalks, walkways, streetscapes. Ramapo Woodmont Hills Apartments, a 384-rental complex on Route 17 near Auntie El’s Farm Stand, that’s still being built, has begun leasing. Also, the nearby development Tuxedo Farms, with 2,000 townhouses, cottages, apartments and estates, will impact Sloatsburg.

Bruno says Sloatsburg is beginning to become a choice for young families moving from Brooklyn.

“Prices are reasonable, it’s commutable and the natural beauty up here is a huge draw,” said Bruno.

Leave it to Bruno to get in on a potential migration of hipsters to the area.

“People come up, they’re browsing for home furnishings and before you know it, they are spontaneously going to an open house.”