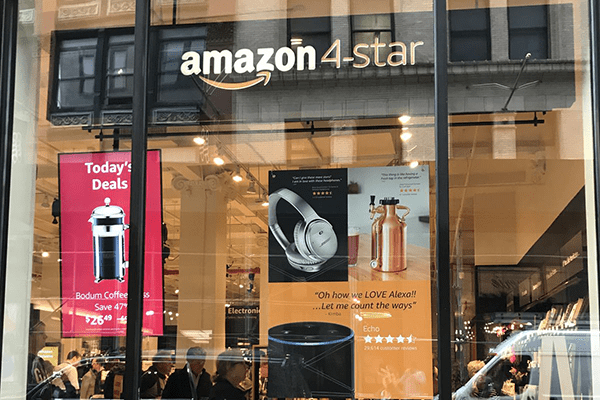 Amazon – the online giant blamed for gutting brick-and-mortar and putting thousands of chains out of business – ironically is filling empty spaces in malls across America with four of its concept stores, as well as Whole Foods Markets, which it owns.

There are more than 500 existing or planned Amazon stores including 476 Whole Foods Markets, 26 Amazon Go convenience stores, 22 Amazon Book stores, six Amazon Pop-Up sites and 20 Amazon 4-Star stores. Two Amazon 4-Star stores are planned for New Jersey: one in the Willowbrook Mall in Wayne and another in the Dream Mall in East Rutherford, and another is slated for Norwalk, Connecticut at the SoNo Collection.

Amazon 4-Star stores sell a curated assortment of products from most popular categories on Amazon.com including consumer electronics, toys, games, books, music, kitchenware, home furnishings and more. The store offers items that have been given at least four out of five stars by the e-tailers consumers. That said, Amazon also throws in items that are new or trending. Amazon in-store prices generally match online prices.

The large, SoHo location, offers a window into what Amazon 4-Star stores look like: the stores do not feel like a department store or even a chain with neatly segmented merchandise. Rather, it has a hodge-podge vibe of a market — but one that sells the kind of merchandise that one most associates with Amazon like books or computer devices. Taking a page from its website, Amazon labels items the way it does online: most-wished for, highly rated, frequently brought together.

In addition to carrying a host of brands, Amazon sells itself — of course — including Kindles and AmazonBasics kitchenware. You can also find the Amazon Echo, Echo Dot, Echo Show and Ring, the smart-home company that Amazon owns. Amazon also pairs products that work with “Alexa,” Amazon’s voice assistant.

Will Amazon be the salve on the wound it has been said to cause?

The e-tailer is opening some low-profile physical liquor stores (mainly to support on-demand liquor delivery), and has been reportedly planning to open a distinct chain of Amazon grocery stores.