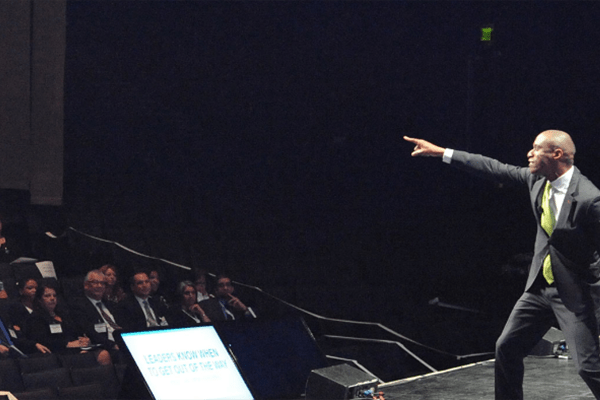 Kaplan Mobray Says Make The Most Of Every Day

Kaplan Mobray’s life reads like a movie script. Immigrant parents from the Caribbean with limited education raise five children by juggling two to three jobs in Providence, Rhode Island. Mobray, ambitious and smart, lands a spot at the elite private school Moses Brown, where he becomes president of the student body. He graduates from University of Pennsylvania’s Wharton School of Business, and snags the prestigious Spoon Award.

Mobray, 47, a West Nyack resident knew then, as he does now, how important it is to covet education and convert it to opportunity. He has a long view on what it meant to be afforded a scholarship to a private school, attend an Ivy, and have a corporate career in banking and marketing for 15 years where he led corporate marketing, advertising, and brand development initiatives for Fortune 500 companies

“Whatever I get,” says Mobray “I make the most of it. I take a little to make a lot.”

In 2009, this achiever took a long look in the mirror and saw an entrepreneur. He drew collectively upon his strengths and assets – while bucking up to face the fear of leaving the security he’d known in corporate America – and branded himself an author and motivational speaker.

“I felt like I had a higher purpose,” Mobray explains. “I knew I had a story to tell and that I had a way to influence and impact others. I wanted to help them soul search, to find safety, to take a conscious approach to their careers and to life.”

It started accidentally when a he was asked to talk to students at New York University about branding. Among his messaging, he told his audience to “know yourself and be consistent so you can build a way to be known.” He stressed the importance of communicating honestly. Connecting with people. Telling them “if you’re silent, you won’t be discovered.”

Mobray said a student told him afterwards that his talk was life-changing.

At 37, with a wife and young child, he took a leap. Many of his speaking engagements had been done through his corporate career or through volunteerism – now he had to monetize this skill. Meanwhile for a full year, he wrote from 9 pm to 2 am every day to turn his presentation into a book.

“I had many sleepless nights,” Mobray said. “I knew I had a good presentation but I had to learn the business of being an entrepreneur. I needed a fee structure, an agent, a quality video, a website – and I needed media attention.

It took about two years for Mobray’s entrepreneurial experiment to catch up to his corporate earnings.

Mobray, a lean man with a crooked smile, had one thing to ride on: confidence he’d built onstage playing the saxophone.

Performing on the sax had taught him to please, pivot and improvise. Music is a way to connect and communicate. You have to speak to people with the instrument. Motivational speaking is not that different as Mobray considers himself an instrument for change and inspiration.

Today, this self-made entrepreneur travels more than 200 days of the year speaking to more than 70 audiences ranging from a handful to more than 5,000, consults one-on-one, advises companies on developing strategies for branding and leadership. Kaplan has worked with NFL players and shared his message at the Super Bowl. He has appeared on CNN, FOX, Businessweek, The Wall Street Journal, Ad Age and more. Much of his messaging is contained in his self-published book, “The 10Ks of Personal Branding.” His teachings are now available online via the Kaplan Mobray Leadership Institute.

When Mobray was a child, he dreamed about being a magician. These days he’s been trying to spread a little magic among the homeless population in New York City handing out airplane blankets he’s amassed from his frequent flying. Mobray is hoping to start a “kindness” campaign with a video that shows him distributing blankets.

“I’m trying to tell people each of us can create hope and change,” he said. “Every day we get 24 hours. We need to give meaning to our lives. Every day. To accept opportunity.” Just as Mobray did, from his humble upbringing. Opportunity, says Mobray, “comes with a certain level of responsibility.”