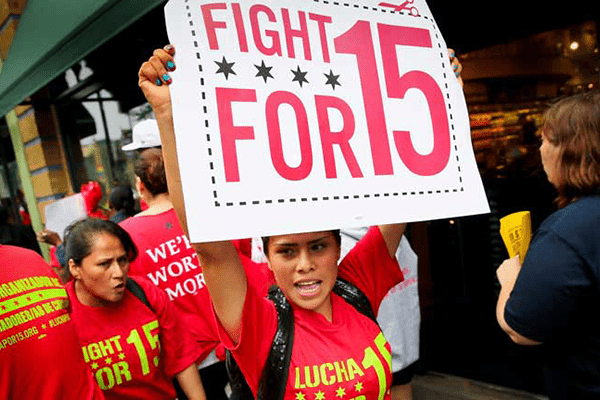 No Economic Jitters Yet According To Federal Reserve Bank Economists

The go-go economy, seemingly unstoppable, is leveling off but not to the degree that it should cause jitters. And the regional economy of the Hudson Valley largely mirrors the national picture.

To date, the rise in minimum wage has not hurt New York businesses, according to a new study.

This is the general message delivered by Jason Bram, a research officer in the Federal Reserve Bank of New York’s Regional Analysis Function, in the 9th Annual Outlook on the Economy at Dominican College Thursday.

However, payroll employment growth has moderated, and the manufacturing sector is weakening, which Bram said “is an early indication of a slowing economy.”

Consistent with national indications, the Hudson Valley is also experiencing subdued growth, the job market is tight, businesses are having trouble finding workers and wage-growth is slowing.

“No one is panicking about recession,” said Bram. “But both the service and manufacturing sectors regionally are showing subdued growth.”

In brighter news, Bram and a team of researchers with the Federal Reserve Bank of New York found no impact on jobs in New York after 2014, when the state began ratcheting up its minimum wage from $7.25 per hour. The findings were part of a newly released study.

Since the fourth quarter of 2009, workers in both New York and Pennsylvania have been subject to the federal minimum wage of $7.25 per hour. Over the last five years, though, New York’s minimum wage has gone up.

New York state has passed a series of minimum wage hikes that are gradually phasing in: a three-year hike for tipped workers, started in 2013, from $7.25 to $9.00 an hour; a 2015 law that raises fast food workers to $15 an hour by 2021; and a 2016 law that will raise the whole state to $15 an hour by 2022. Meanwhile, neighboring Pennsylvania remains at the federal minimum wage of $7.25 an hour. Since the effect of the minimum wage on jobs is hotly contested — critics contend it raises pay at the cost of less employment — why not look at the counties that lie on either side of the New York-Pennsylvania border, and see how they performed? If minimum wage hikes harm employment, that should show up in a comparison.

The Fed study focused on employers that pay lower wages in retail and hospitality industries in counties along New York’s Lower Tier region bordering Pennsylvania, with the latter state having made no corresponding increase to its minimum wage. The logic for focusing on counties on either side of the border is that, being right next to each other, they presumably share similar regional economies. The chances that you’re comparing apples and oranges — that your analysis will be thrown off by random events and confounding variables — is minimized.

The authors examined the economic differences along the border of New York and Pennsylvania. The minimum wage of Pennsylvania remains $7.25 an hour, with New York’s minimum being $15.

The researchers looked two sectors from 2010 to 2018 — retail, and leisure and hospitality — across 10 New York counties and 9 Pennsylvania counties. They found earnings grew faster on the New York side. But since the minimum wage was going up, that’s not surprising. What’s more important is that, while retail is declining everywhere, both sets of counties declined at essentially the same rate. Meanwhile, leisure and hospitality employment grew at the same rate. Essentially, they found zero employment effect.

Fed researchers reported no discernible effect on employment after New York raised wages from the perspective of any job losses to neighboring Pennsylvania counties but say longer-term effects could play out over time.

“It is certainly conceivable that minimum-wage differentials may affect decisions on firm location, business investment, lease renewal, and the like over a longer time horizon,” the researchers wrote. “As currently scheduled, the phasing in of the higher minimum wage across upstate New York still has a long way to go.”