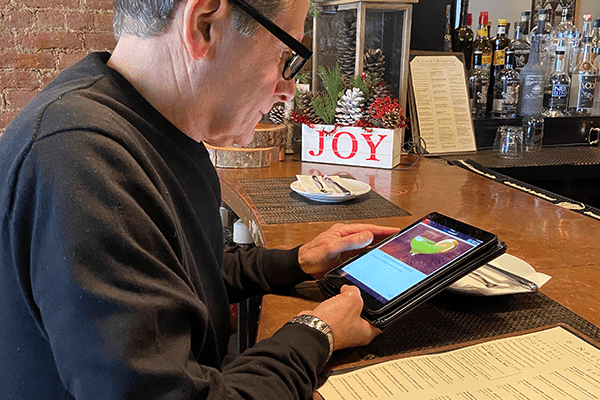 Every restaurateur knows you’ve got to keep it fresh, keep it new, shake up the menu. But now it’s the paper menu itself – the physical staple of the dining experience – that’s getting a digital shakeup.

There’s no denying we live in a digital age and it seems everywhere you shop, eat or go, something has been digitized.

At 8 North Broadway in Nyack, chef/owner Constantine Kalandranis has jumped on the digital bandwagon with an e-menu tablet that lists drinks, wines, and desserts with tempting images and explanations. The chef has not gone as far as to digitize the entire menu but says the three-month e-menu pilot program is proving to be profitable.

“We see more people ordering a second, and a third glass of wine,” he said. “We’re also seeing a 10% uptick in dessert orders.” Which makes sense – it’s hard to resist a dessert that’s staring back at you from a digital tablet. (Think about traditional Italian restaurants that bring by those desserts on a tray that you had not planned to order. Harder to resist the visual temptation.)

eMenu International, which manages menus and wine lists in restaurants in 15 countries worldwide, says customers have seen increase in their average check from approximately 3% to 9% since implementing the digital menu to their operations.

The digital e-menu is novel; it’s a source of table conversation. Maybe even a substitute for scrolling Facebook and Instagram while you’re at the table. And a patron is more likely to be drawn into a fuller description of a wine or spirit rather than by a line or two on a menu.

At 8 North Broadway, e-menus are limited to perusing. Wait-staff still takes the meal order, as well as the drinks and desserts. Menus are given to each patron at the bar or table. Restaurants using the full capacity of e-menus, particularly fast-casual establishments that connect to the POS (point of service) system, enable customers to choose their food and drink, place an order and pay.

Kalandranis does not want the dining experience at 8 North Broadway to turn into an impersonal, digital experience. “At first we thought it might be the next step – to expand the entire menu to digital but we’ve reconsidered that because the human touch is so important in the dining experience,” said the chef.

The digital menu, though, has cut down on printing costs.

“I was printing 1,000 menus a year and spending $300 on ink.” Removing beverage and dessert from the paper menu cuts these costs in half. Kalandranis says it’s time-effective to put wines and desserts on an e-menu because the selection is changed up less frequently than the food, for example, which can change daily.

A restaurant can use e-menus to feature and promote private rooms, catering packages, special events such as sports games, bands and more. The tablet can include an event tab, where a customer can enter their contact information to inquire about a private event.” Or, the e-menu can be used to promote a sister, or a chain of restaurants.

Restaurants can customize e-menus and updates with a click of a button. Another feature of e-menus are multiple language options. Restaurants with tourists are able to view the menu in their native language.

Not every restaurant will adopt this trend. Restaurants need to take a calculated risk to adopt to this technology by considering the ROI and all merits and demerits the technology attracts.

Issues of concern include credit card security. Until and unless the transactions (bill payments) are PCI-DSS complaint, a customer’s credit / debit card data is at stake. A customer drops the tablet on the floor by mistake and the screen breaks. Who fixes it? Or replaces it?  The 8 North Broadway chef says his tablets are guaranteed for wear and tear. And there’s theft. A digital tablet could be a tempting item to pinch – though Kalandranis reports that there have been no offenders thus far.