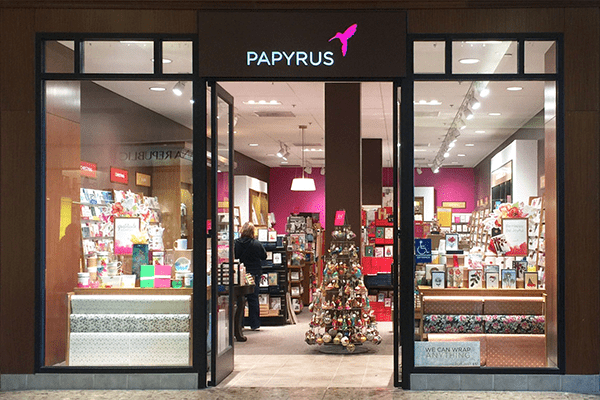 PAPYRUS TO CLOSE ITS DOORS

Papyrus, the specialty stationery store, will close its doors.

In a letter to employees, Dominique Schurman, COO of Schurman Retail Group, which owns Papyrus stores, said the company would close its doors. The company has hired liquidation firm Gordon Brothers to assist with the going-out-of-business sales.

Mall-based specialty retailers have faced numerous challenges, including traffic declines and changing consumer habits. Papyrus’ specific category has faced additional disruption from technology. The number of cards sent through the mail has declined over time leading Hallmark Gold Crown stores to nearly halve over the course of a decade, with many blaming the rise of digital communication and e-cards. Things Remembered, another gift specialist, filed for bankruptcy about a year ago and closed a majority of the stores it operated at the time.

Schurman cited “current challenges of the retail industry” and said the company had been “diligently working to revitalize our business” for months.

The company has not announced the closures publicly, but employees at stores in multiple states confirmed that their stores will close and they have been told to display sale signs.

Papyrus has 260 stores including the location at The Palisades Center.

Store managers were recently told to stop taking inventory and were given packets with details on liquidation sales.

Debtwire reported in November that Papyrus was working to win rent concessions from landlords and could close some stores. Founded in 1950, in a kitchen, Papyrus opened its first store in 1973. Founders Marcel and Margrit Schurman, “had a vision for products of uncompromising quality which provided the starting point from which genuine personal connections are made,” according to the brand’s website.

Currently led by Dominique Schurman, Schurman Retail says it is a leading retailer of gift and “personal expression” products. Schurman Retail is also home to the Carlton Cards, Paper Thread and American Greetings banners, among others.

NO HAIL MARY FOR A.C. MOORE IN NANUET

Meanwhile the A.C. Moore store in Nanuet will not be one of the lucky ones bought by Michael’s. The company notified the New York Department of Labor Jan. 12 that it would be closing three of its hobby, toy and game stores in the state: in Erie, Nassau and Rockland counties.

Layoffs for the Nanuet site will occur from Feb. 19 to March 4, the Worker Adjustment and Retrain Notification said; 42 employees are affected.

A.C. Moore announced in November it would close all stores, including the four in the Hudson Valley. The chain, owned by Nicole Crafts, said it decided to “exit its retail operations” by closing all A.C. Moore stores as part of a “broader strategic plan.”

BOSE ON ITS WAY OUT

Citing “the dramatic shift to online shopping in specific markets,” Bose Corporation said it would close its remaining 119 retail stores across North America, Europe, Japan and Australia over the next several months.

There is a Bose store in Woodbury Common Premium Outlets.

Bose is pulling back on its global brick-and-mortar presence, stating that its noise-canceling headphones, wireless sport earbuds, portable speakers and smart speakers are “increasingly purchased through e-commerce.”

In 1993, Bose opened its first retail location in the U.S. to provide personal, private demonstrations for its home entertainment products. “At the time, it was a radical idea, but we focused on what our customers needed, and where they needed it — and we’re doing the same thing now,” said Colette Burke, VP of global sales at Bose.

She added that “It’s still difficult, because the decision impacts some of our amazing store teams who make us proud every day.”

The company will offer severance and outplacement assistance to impacted employees, but declined to state the exact number of workers that will be affected.

The company announcement comes on the heels of a massive year of store closures in the United States. Late last year, Coresight Research revealed that over 9,000 brick-and-mortar locations shuttered in 2019, up nearly 60% from the year prior.

“Originally, our retail stores gave people a way to experience, test, and talk to us about multi-component, CD and DVD-based home entertainment systems,” Colette Burke, vice president of Bose’s global sales, said in a statement. “At the time, it was a radical idea, but we focused on what our customers needed, and where they needed it — and we’re doing the same thing now.”

Bose will continue to sell products on its own website. The company also currently has a presence through third-party sellers including Best Buy — a retailer that also went through a period of shuttering some 100 locations in the past decade in order to right-size its fleet.