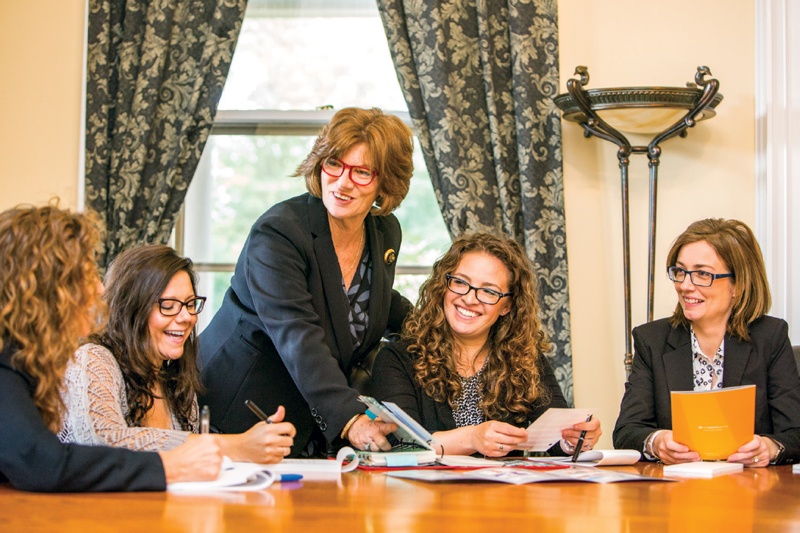 Relying on a mélange of artistic talent, perseverance and a keen ear for absorbing shrewd advice, Ann Byne built The Byne Group. Now, she is at a crossroads. After a nearly three-decade run as the architect of a branding and marketing agency, the red-headed, stylish entrepreneur is taking a moment to ponder her accomplishments while preparing for the recent merger between her firm and GMLV, a Newark-based agency with a national client roster.

Byne plans to remain involved in the new company during this time of transition. Eventually, The Byne Group name will be absorbed by GMLV.  The Byne Group’s seven employees will spend two days a week in Newark. For now, Byne will maintain the office at the the Ryan Estate, also known as the Montebello Mansion.

After a long and focused career, Byne is eager to taste a bit of freedom. She and her husband Eric, a retired attorney, plan to take a once-in-a-lifetime trip to Australia and New Zealand later this month. And most of all, she relishes the chance to spend quality time with her family, particularly her four (three red-headed) grandchildren, ranging in ages from five to 12.

“There is such a richness in being a grandmother,” said Byne. “You get to create a world for them, the kind of world you might not have had time for when you were raising your own kids. With grand-kids, you’re very aware that there’s a short window and you don’t want to lose it.”

Byne’s voice grows sentimental when describing her desire to create magical moments for her kin. She says she likes being the “fun, kooky grandmother, painting with them.”

Which brings us full circle to where Byne’s odyssey began. A Long Island native, Byne grew up the middle child in a middle class home with two siblings and parents who owned a cleaning stores and toiled for long hours. Art was her retreat. “I was the one whose toothpick sculpture was given awards in elementary school,” she recalls. But a relocation from Long Island to Brooklyn when she was 15 – a move that caused trauma for a shy teen – inadvertently put Byne on a path for an artistic career. “Because we lived in Brooklyn, I took art classes at FIT, I spent weekends at museums in the city. This never would have happened if we’d stayed on Long Island.”

Byne graduated from Pratt Institute, where she was one of a few females in her classes. Though it was the early 1970s – a time of change for women – Byne at first made a “safe choice” and chose a major in art education. But her desire to create usurped a safer path and she began to freelance as a graphic designer. The freelance life suited Byne, who married and raised two children. Everything changed when the family moved to Rockland County in 1984 and she worked in the corporate communications department for O&R as a freelance designer.

Little by little in a county where networking is everything Byne’s talent shone. A long, continuous turn at freelancing morphed into The Byne Group in the mid-1990s when the solo entrepreneur began bringing on employees and expanding from a 56-square-foot office to a 328-square-foot space in the Montebello Mansion. Today the Byne Group occupies 1,200 square feet there.

Taking that first leap to hire an employee was one of the hardest moves after a long career in freelancing but Byne heeded some good advice.

“I was doing everything myself,” said Byne. “Everything was falling through the cracks. I owed people money. People owed me money. I was ready to throw in the towel.”

Byne turned to another woman, her mother-in-law, who had never had a career but dished out a sterling piece of advice. When Byne told her “I can’t afford to get help,” her inlaw said “You can’t afford not to get help.” Byne brought in the wife of a friend. “She got on the phone, she collected owed money, she did what I couldn’t do. She was emotionally removed. She freed me up to do what I do best which gave me room to grow the business.”

The Byne Group has done work for Pepperidge Farm, Novartis, Imax, O&R, Dominican College, Montefiore Nyack Hospital, Suez and Sterling National Bank. Nearly 80% of the firm’s revenues are generated by corporate clients. Byne sits on the boards of the RBA and the county’s Workforce Development Board.

“Combining our assets with The Byne Group is a natural step for us,” said Loretta Volpe, one of GMLV’s co-founding partners. GMLV’s client roster includes Barnes & Noble, T-Mobile, Honda, Chubb and Newark Tourism.

Byne has always believed teaming up with the right partners is the key to success. As her company grew, she selectively chose “ideal clients,” or companies with marketing departments that didn’t need to be educated on the value of spending marketing dollars. Instead, she worked professional-to-professional, crafting campaigns for companies that understand the necessity to create the right message.

Several years ago, Byne attended a seminar program at Northwestern University in Chicago, where she participated in a leadership class taught by Deepak Chopra.

“This made me think about my future,” said Byne. “It made me ask myself where do I want this to go? One thing I recall thinking was that I didn’t want to die at my desk.”

For now, Byne is headed on an adventure with unknown possibilities. She will steer the company through the merger, travel, indulge her grans, and pick up a paintbrush again.

“I don’t know what’s next, exactly,” said Byne. “That’s what makes it exciting.”