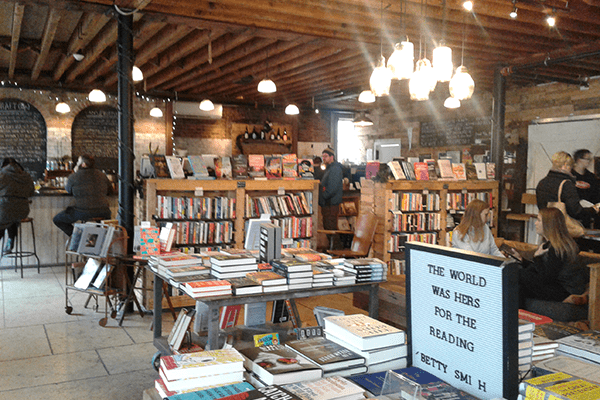 What pairs well with Counter Culture espresso, Industrial Arts Metric draft beer, or pie from Down Under Bakery? Books. Lots of them.

It’s the last day of 2019 and Rough Draft Bar & Books in Kingston is swarming with activity. Some are browsing the bookshelves; others are sitting at the long bar nursing a brew or a coffee. There’s a small group gathered on a couch plotting efforts to help Andrew Wang become the next president. Two patrons are introducing their leashed dogs to one another. The scene is a delight to hipsters and bibliophiles alike. It would make Meg Ryan’s character in You’ve Got Mail twirl and smile an ironic, retro smile – as in everything that’s old is new again.

Independent bookstores are popping up in the Hudson Valley – but they are much more than simply bookstores. They are hybrid of bars, cideries, wineries, coffee houses, event spaces, bakeries, and more. In essence, the latest iteration of the indie bookstore is Cheers meets Central Perk meets Ted Talks. The 21st century book store is striving to be the kind of community hub that Starbucks or Barnes & Noble fails to be, and the nexus of connection that it once was.

Split Rock Books in Cold Spring, which carries a curated selection of new books with a focus on literary fiction and non-fiction, small presses, local interest and children’s books, opened in 2018. The store hosts children’s and family programming, book clubs, readings, signings and discussions. Binnacle Books, a new and used book store in Beacon, hosts readings and partners with Dennings Point Distillery. The store offers a “matchmaker” service – book lovers fill out a form that includes the last book they’ve read, genres of interest and price points, and the book store offers a match.

Indie bookstores are winning customers back from Amazon, Borders, Barnes & Noble and other powerhouses by offering strong connections to local community values. Curating books gives local sellers an edge as does being the place where everyone knows their name and what they like to read and drink. As more people spend time online, they crave connection. They are seeking ways to find community. Dropping into a bookstore serving wine or coffee offers the promise of social interaction.

Even ebooks, often touted as the death kiss to physical books, are becoming less popular and giving way to printed books.

ABA membership is at its highest point since at least 2009, with 1,887 members in 2,524 locations. Indie bookstore sales were up 5% last year, and the industry saw an average annual growth of 7.5% over the past five years.

This is a positive turnaround — from 2000 to 2007, independent bookstores were on the decline. More than 1,000 bookstores closed in that seven year period. Since 2007, hundreds more have closed, including more than 600 Borders.

Local bookstores still compete with price-slashing from Amazon, and with the big chains. They need to be more than just “bookstores” in order to be profitable – and food and beverages are a big draw. That kind of patronage builds loyalty, even if books do cost less on Amazon.

Barnes & Noble, once enemy number of one of independent bookstores, met an ironic fate with the rise of Amazon. B&N operated on a model of being the big box store of books, carrying so many titles at such a high volume that they could offer lower prices than any independent bookstore could ever match. Amazon beat them at their own game. B&N responded by trying to get in on the ebook craze and created their ereader, the NOOK. Ultimately this was a failed venture, losing the company more than a billion dollars.

B& N has managed to stay afloat for longer than predicted. They’ve had four CEOs in five years and have closed more than 150 bookstores in the past decade. Rockland County’s two locations – one in the Palisades Center, the other on Route 59 at Rockland Plaza – remain open.

Pickwick Books in Nyack is Rockland’s only indie bookstore but the county does not have anything akin to the new breed of bookstores that are rising up in the Hudson Valley.

With the recent $638 million acquisition of Barnes & Noble by investment firm Elliot Management, an investment firm that also recently acquired the British equivalent, Waterstones, there is talk that the only remaining bookstore giant will thrive again.

When Elliot Management took over Waterstones in 2012, the large UK bookstore chain was also struggling, but between the acquisition and James Daunt taking the helm, the company is seeing positive returns. The tactic? According to Daunt, he operates each Waterstones bookstore more like an interconnected network of independent bookstores. Allowing local management to cater to the population of each town, hosting events, curating displays carefully—and it has worked.