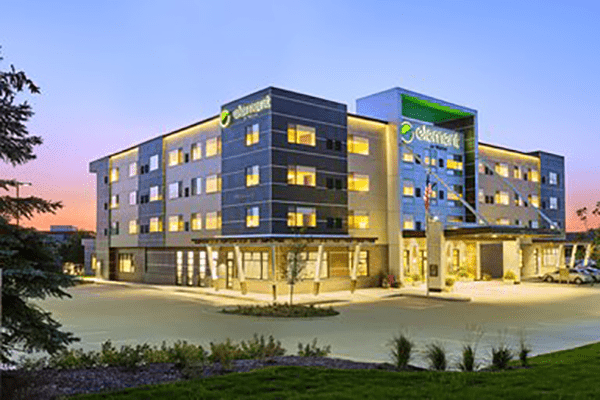 2020 Could See More Than 200 Rooms Added, Included 89 By Element By Westin in Spring Valley

Hoteliers of all stripes are betting Rockland County’s business class needs more rooms and the outlook for tourism is robust. Slated to open in 2020, Element by Westin, a Marriott brand, and Holiday Inn Express at Thruway Plaza, likely in 2021, will add more than 200 rooms to the Route 59 Corridor.

Orangetown has signed an agreement with River Link Hotels of Newburgh that could lead to the $1.6 million sale of town-owned land for a Hilton hotel, adding more than 200 rooms on the former Rockland Psychiatric Center campus.

Negotiations are underway at Stony Point’s former Letchworth site where developer Raj Amar wants to build a luxury resort and golf course – giving Northern Rockland County its first destination hotel. And HNA at Palisades, a conference center and hotel that remains on the market for sale, has zoning permits in place to build an additional 100-room hotel on its sprawling grounds.

These projects alone, if seen to fruition, could add up to 1,000 beds to the county.

Add to this ongoing speculation that hotel concepts could become part of The Shops at Nanuet’s vacant Sears’ buildings. Hotels are the hot trend in large mixed-used projects by residential and retail developers, complementing retail, office and residential uses. The word “hotel” is even used by many who believe the Palisades Center may need to reinvent itself as the retail market shrinks.

“The hotel market in Rockland is strong,” said Jeremy Schulman, Rockland County’s director of Economic Development and Tourism. “These companies are doing research. They are studying the real estate market, pricing, location. They wouldn’t be coming here if they weren’t doing their homework.”

Nationally, the hotel industry is continuing to grow, albeit more slowly than in prior years. CBRE Hotels, in its December 2019 Hotel Horizons report, anticipates a continued industry slowdown through 2021, with higher growth rates projected to return in 2022.

The hospitality advisory company also adjusted its full-year 2019 demand outlook upward from 1.8 percent year-over-year growth as projected in September to 2 percent, and predicts occupancy to remain flat at 66.1 percent as opposed to dipping slightly. Year-over-year room rate growth will remain limited, at .9 percent to $131, resulting in a 2019 revenue per available room forecast of .8 percent growth over 2018.

For hoteliers, Rockland County’s draw for tourists is primarily its proximity to both the city, Bergen and Westchester counties, and the Hudson Valley. In neighboring Orange County, there are 20 new hotels proposed or under construction, including five hotels at or near Woodbury Commons Premium Outlet.

Element by Westin, a sleek, eco-friendly, extended-stay 89-room luxe hotel, is the first to bring the boutique-feel from a national brand to the county. Features include apartment-size rooms, fitness center with heated indoor pool, hot breakfast buffet and sleek lobby bar. The Rockland hotel is marketing itself as “an ideal location close to West Point and just off of Interstate 87/287 at exit 14,” and as a convenient location “within five miles of several major corporations, including Pfizer, Scapa, AERCO, Teledyne and Salvation Army.”

“We believe Rockland is going to be a good fit,” said Parakh Dani, director of sales for marketing at Element, which has 50 U.S. locations and more than 104 in the pipeline. Element’s website says average occupancy rates are nearly 79 percent.

The hotel is hoping to capture a mixture of business travelers and millennials who are looking for minimalist design and an eco-friendly vibe.

Element by Westin at Spring Valley Market Place, due to open in March, will sell rooms for $169 to $189.

To date Rockland’s hotel market, which has fewer than 20 properties, is not especially segmented: Pearl River Hilton and Crown Plaza Suffern are the county’s two premier but traditional hotel properties. In recent years, the addition of The Time Hotel of Nyack and Valley Rock Inn in Sloatsburg have added the cache of boutique and destination properties. Haverstraw has two bed-and-breakfasts, Bricktown Inn and Casa Hudson. The Stony Point Center, adjacent to a farm, and the Three-Fold Community in Chestnut Ridge offer a local experience.

If the project materializes, River Link Hotel’s Hilton brand in Orangetown would be an extended stay all-suite hotel with a restaurant. The developer expects to draw business travelers from the Blue Hill Plaza Office Complex, JP MorganChase data center and other area businesses.

Occupancy rates at hotels countywide in 2018 ranged from 65% at Pearl River Hilton and 89% at the Residence in Orangeburg to 74% at both the Hilton Garden Inn in Nanuet and the Doubletree Nanuet.