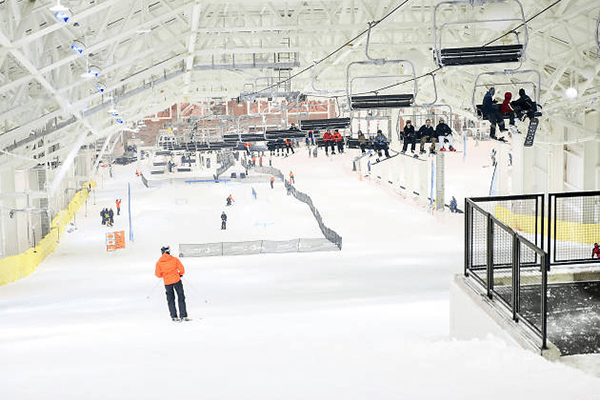 Efforts are underway nationwide to save the American mall. Add hotels, convention centers, housing. And experience. The American consumer will come to the mall for an experience, is how the thinking goes.

American Dream, new Jersey’s $5 billion, 3-million-square-foot American Dream entertainment and shopping complex in East Rutherford, is promising the kind of experience American consumers could only get if they take a trip to Dubai – a real-snow ski and snowboard center. The indoor ski dome, which recently opened, is dubbed Big Snow. With the temperature set at 28 degrees and snow falling, it is a 180,000-square-foot, 16-story, climate controlled structure with four acres of snow-covered slopes and a 160-foot vertical drop with a graduated pitch of 26% at its steepest point. It took two months to create the snow needed to fill the facility for its debut – a feat of man recreating the wonder of nature.

Big Snow’s opening marks the second phase of the mall’s unveiling: On Oct. 25th, the complex opened Nickelodeon Universe theme park and a NHL-size ice skating rink. The DreamWorks Water Park was scheduled to open prior to Thanksgiving but has been indefinitely delayed.

The mall’s retail, some 450 restaurants and stores, are slated to open in March.

The mall developer, the Canadian outfit Triple Five, is taking a page from its playbook: opening experiential and entertaining components before it moves onto retail and food. These tactics have been successfully employed at the West Edmonton Mall in Alberta, Canada and the Mall of America in Bloomington, MN.

Triple Five has pioneered the concept of adding features such as theme parks to its malls to draw visitors to ensure the mall concept survival.

Both the Palisades Center and The Malls at Nanuet are suffering from the constriction of big boxes and department stores. The past two years have brought closures including Sears, Macy’s and Lord & Taylor. Many are wondering what these two crucial economic drivers will do to keep their entities from becoming irrelevant.

“We’ve gotten calls from around the world about what’s going on with this project,” said Joe Hession, president and CEO of the company that runs the dome, Snow Operating. “And even though there are other snow domes in the world, I can tell you none of them has been designed the way we’ve done this.”

The snow dome operators say Big Snow isn’t attempting to recreate an authentic outdoor skiing experience. It is however offering skiers a chance to sharpen their turns or take a run when they’re itching to get on the snow.

In the beginning, I think the Snow Dome will attracted locals, but over time it will be a tourist draw,” Hession added.