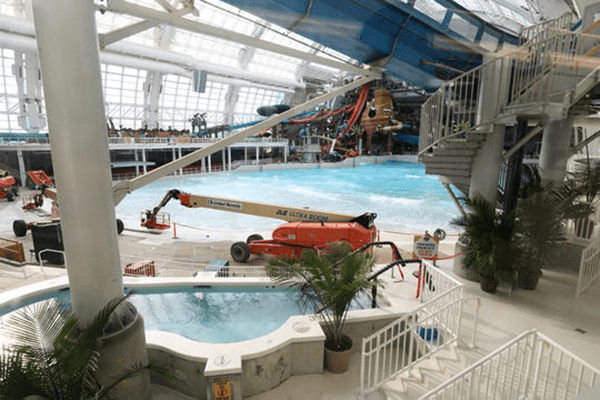 DreamWorks Water Park at American Dream in New Jersey will not be opening next week as previously planned, according to a company spokesperson.

The water park was slated to open Nov. 27th, the day before Thanksgiving as part of American Dream’s second phased opening. Mall officials do not have a reported date for the opening.

“Creating the ultimate entertainment experience takes time and patience,” an American Dream spokeswoman said. “Unfortunately that means we’ll have to wait a little longer for the opening of DreamWorks Water Park, as we are postponing the previously announced opening date of Nov. 27.”

DreamWorks Water Park, an indoor water park, will include the world’s largest indoor water coaster, a free fall slide with a 70-foot drop, a lazy river and a 1.5-acre wave pool.

Delays and postponements are part of the history of American Dream, which took nearly two decades and $5 billion to be built, with several developers failing to complete and open it. Triple Five took over the project several years ago and last month opened what it described as “Chills and Thrills,” the first chapter of the complex: an 8.5-acre Nickelodeon Universe theme park and NHL-sized indoor ice skating rink.

The premiere of the water park, which has a 1.5-acre wave pool and 40 water slides, was dubbed “Chapter 2: Make a Splash.”

What Triple Five called American Dream’s “Chapter 3: Every Day is a Snow Day,” the opening of Big Snow, is still slated for Dec. 5. The attraction is described as “America’s long-awaited first real-snow, year-round, indoor ski and snowboard park.”

Big Snow plans to kick off its opening with an invite-only event that will feature an appearance by world champion and Olympic gold medal ski racer Lindsey Vonn.

American Dream’s retail component, about 450 stores and dining offerings, is scheduled to open next March. That will be the final stage, “Chapter 4: In Grand Style,” for American Dream.