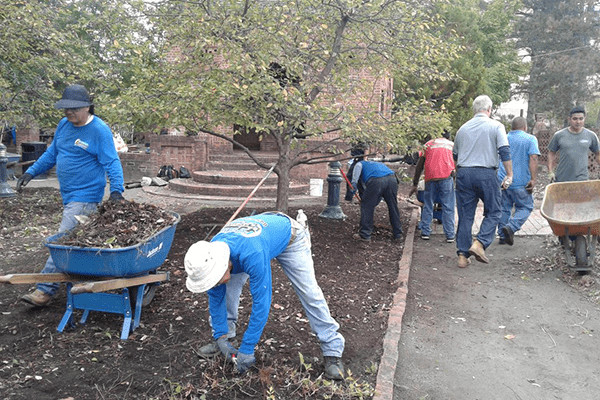 Dutch Gardens Gets A Facelift

The scene today at the Dutch Gardens aside the Rockland County Courthouse was a property owner’s fantasy: More than 40 gardeners were pulling weeds, cleaning flower beds, carting away brush, planting, and spreading mulch.

These donated hands, courtesy of the Professional Landscape Association of Rockland County, were prompted by a sad Facebook post showing a dilapidated and degraded Dutch Gardens, a precious green respite in the heart of New City.

“We know county budget cuts have caused neglect of a wonderful park so I called Ed Day and asked ‘how can I help?’” said Steven Botto, the association’s president.

The county ponied up $3,100 to plant 92 boxwood, four large miscathus or silvergrass (ornamental grasses), and an assortment of 1,000 perennials. It also donated mulch from the county’s Solid Waste Management Authority’s compost site. One key to rejuvenating the garden was to plant deer-resistant species.

This year’s heat and humidity created a particularly conducive environment for out-of-control weed growth. But Rockland County Parks Operation Manager Michel Dimola said the county, which has only three grounds workers, is too short-staffed to care for its 3,179 acres in 27 parks.

“We are understaffed,” said Dimola, adding we lost half of our staff in 2008. “We just have a lack of manpower. We do the best we can.”

What Dimola  really wants is for volunteers to get involved in the Dutch Garden to help maintain it.

“We’d love to have a garden club help out on a regular basis,” he added.

The 3-acre garden, which has a brick teahouse with a fireplace, a gazebo, an arbor and a bandstand, was built in 1936 under the supervision of Mary Mobray Clarke, landscape consultant as a memorial to the early Dutch settlers and is a reminder of the importance brick making had on the county’s economy.

Regular tending of the Dutch Garden would be ideal. Botto describes the volunteer mission as “search and destroy” because it was in such bad shape. By 10 am, the parking lot aside the court house was filled with landscaping trucks. There was a mountain of mulch. Edgers were buzzing, wheel barrows were weaving, brush piles were being hauled off.

Waiting for the new plants, Botto was on his cell like a movie director orchestrating the operation.

“Most of us live here,” Botto said. “We provide services here. This is a way of giving back.”