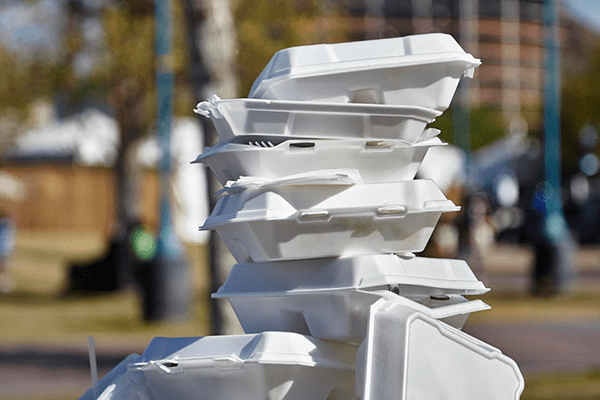 Polystyrene foam food and beverage containers, better known as Styrofoam, are disappearing from restaurants and other food establishments from coast to coast, as state and local governments enact laws seeking to curb the ever-growing amount of environmentally troublesome single-use plastics.

Rockland County could join movement, which includes Nassau, Westchester and Ulster counties, as well as Albany and Suffolk County.

Rockland County Minority Leader Lon Hofstein wants the county to explore the benefits and drawbacks of banning the use of Styrofoam used for food services in the county. New York City has already begun enforcing a city law requiring all restaurants and food service establishments to stop using polystyrene foam cups and clamshells,

Swapping out foam takeout containers and cups will likely be costly for restaurateurs already struggling with razor-thin profits.

Maine is the first state to ban polystyrene, or Styrofoam food containers. The ban takes effect in 2021. Hospitals, Meals-on-Wheels providers and lobster dealers would be exempt from the ban. But it still applies to restaurants, food trucks, caterers, grocery stores and other businesses.

Similar bills are in progress in Vermont, Colorado, Oregon and New Jersey.

Some municipalities have banned the use of polystyrene by all stores, restaurants, parks and beaches. Others target food and beverage containers specifically. Some include eating utensils, and others target plastic materials as well.

Polystyrene is a type of plastic manufactured from non-renewable fossil fuels and synthetic chemicals. It usually comes in two forms: Expanded polystyrene foam (EPS), which is the stuff that’s made into cups, plates, take-out food containers, and packing materials; and “solid polystyrene,” which gets turned into plastic forks, CD and DVD cases, even smoke detector housings.

Like all plastics, polystyrene stays around in the environment for hundreds of thousands of years.

The U.S. Department of Health and Human Services added styrene to a list of possible carcinogens. Styrene is a chemical found in polystyrene plastics, better known as Styrofoam materials.

The polystyrene foam take-out containers and cups targeted by lawmakers are durable and waterproof — but also difficult and costly to recycle. It’s particularly noxious, environmentalists say, because its light weight makes it conducive to be carried by wind and water into the ocean. It also crumbles easily into small pieces, making it more likely that birds and fish will eat it.

A recent study conducted by the environmental watchdog organization Riverkeeper found that Styrofoam was the Hudson River’s most common pollutant.

It isn’t just lawmakers pushing for more sustainable restaurants. Consumers want to spend their money without harming the environment. According to a Nielsen survey, 48 percent of Americans said they would definitely or probably change their spending habits to reduce their environmental impact. Last year, consumer pressure led companies like Starbucks and Disney to ditch plastic straws.

Despite the consumer demand for greener restaurants, the industry has largely been slow to respond. Swapping out foam takeout containers and cups will likely be costly for restaurateurs already struggling with razor-thin profits.

Despite the material’s deficits, styrene remains popular in the packaging and food industries because of its unique combination of properties — it’s remarkably light and offers effective insulation, keeping hot things hot and cold things cold. There are other products, including a rigid, lightweight mushroom-based substitute, but they can cost more, which makes some small restaurant owners wary.

Maine’s bill faced strong opposition from the plastics industry, food service container manufacturers and tourism groups, which argued for the low cost of polystyrene. Such industry groups argued that Maine law doesn’t ensure that polystyrene is replaced with a more eco-friendly material.

Some of the items they switched to — such as hard plastic clamshell containers — may be only slightly more recyclable than polystyrene. That’s why many environmental activists now favor moving away from laws banning individual items like food containers, straws or plastic bags, and toward comprehensive rules addressing all types of plastic.