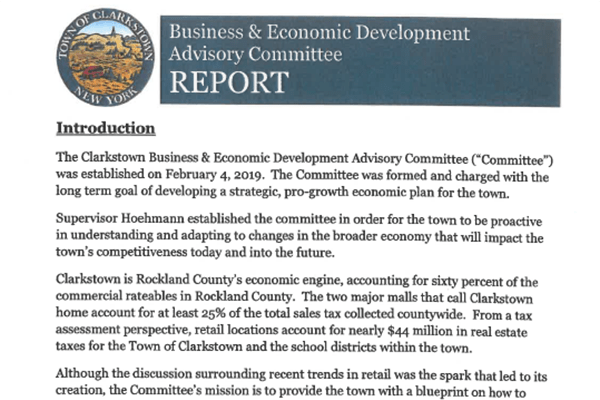 Allow the Palisades Center to fill its unused space. Streamline the process for developers. Hire a full-time economic development professional.

These are some of the key recommendations in a long-anticipated report that’s been released by the Clarkstown Business and Economic Development Advisory Committee. See full report here. The committee, appointed by Supervisor George Hoehmann in February, includes 17 local business owners, real estate professionals and town officials.

The 10-page report, more a prescriptive than a specific road map, broadly touches on ways to enhance Clarkstown’s potential as a place to do business. The report states that Clarkstown is “Rockland County’s economic engine, accounting for 60% of the commercial ratables in the county.” The Palisades Center and the Shops at Nanuet, the report says, account for 25% of total sales tax collected by the county. The committee members say “they feel strongly that the strength of the town’s economy and continued success of the Palisades Mall are intrinsically linked.” The committee cites its role in continuing negotiations with the mall and says the mall must diversify its offerings to include more entertainment in order to survive.

EklecCo NewCo, the Delaware-based LLC that owns Palisades Center, is fighting Clarkstown over a town-imposed restriction limiting its right to build out and lease an existing but unused 240,000-square-foot section on the mall’s fourth floor. The 1.85 million square foot mall needs town and voter approval in order to expand. The Palisades Center is trying to eliminate the restrictive covenant in both the courts and in private negotiations with town officials. The mall is not in favor of giving voters the right to decide the issue.

Committee members also made recommendations on taxing structure. The report urges the town to “re-examine the homestead/non-homestead property tax system,” citing that business owners bear a disproportionate brunt of property taxes, and do not benefit from town services such as garbage pick-up.

The report also recommends an effort to increase the percentage of sales tax revenue Rockland County shares with Clarkstown and other municipalities but power to change this tax structure rests solely with the county.

Laid out in broad-stroke suggestions, committee members say the town should make it easier for developers to streamline projects. They are asking the town to review its zoning designations, streamline and expedite the land use approval process, modify residential zoning codes to allow 450-square-feet studio apartments for millennials and empty nesters. One specific proposal offered is to allow the Planning Board to give preliminary and final approval at the same time – thereby eliminating additional hearings.

A good chunk of the report deals with polishing and promoting Clarkstown’s image as a place to do business by re-designing the town’s business website, creating a slogan and logo for the town’s economic development campaign, having business owners contribute anecdotal successes via video, and host quarterly forums with local chambers and business groups to synergize the effort.

Committee members cite their desire to continue working as a group, and recommend the town should either establish an economic development office or hire a qualified consultant to carry out the report’s recommendations.

Town board members are reviewing the report, which has not yet been publicly released.