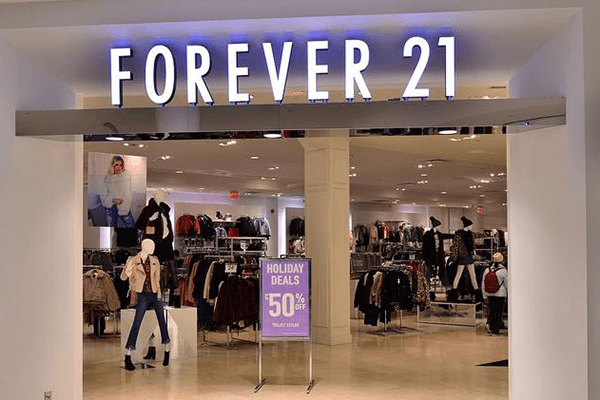 Forever 21 filed for bankruptcy protection on Sunday. The company will close up to 178 stores in the United States as part of its restructuring.

“The decisions as to which domestic stores will be closing are ongoing, pending the outcome of continued conversations with landlords,” company officials said in a letter to customers on the website. “We do however expect a significant number of these stores will remain open and operate as usual, and we do not expect to exit any major markets in the U.S.”

Meanwhile, Pier 1 on Wednesday reported second quarter net sales fell 14.3% year over year to $304.6 million. Comparable sales dropped 12.6%, according to a company press release. The company’s interim CEO Cheryl Bachelder announced the company has decided to close 70 stores in the fiscal year, but expects that number will increase.

Forever 21 has a location at the Palisades Center. Pier 1 is located in Spring Valley on Route 59.

It is unclear whether or not Forever 21 and Pier 1 in Rockland County will become the next victim of the retail apocalypse. Last week, RCBJ reported on the closure of Fairway and the vulnerability of several stores at the Shops of Nanuet.

Many fashion retailers are suffering from falling mall traffic, heavy discounting in apparel, off-price and other discounters encroaching on their market share, shifts to e-commerce, heavy debt loads, changing habits in the apparel space and shifts in consumer spending patterns from products to experiences.

The current period of consolidation colloquially known as the “retail apocalypse” may last for another 18 to 24 months, according to analyst note from investment bank B. Riley FBR.

According to Scott Carpenter, who heads the retail solutions unit at B. Riley’s liquidation arm, Great American, “most retailers” are over-stored. That means another 30% of current retail space “would cease to exist in its current form, as consumer buying trends shift increasingly online,” Carpenter told B. Riley analysts.

That includes both liquidating retailers and healthy players looking to rationalize their store fleets. Much of the closures would happen at B- and C-class malls, which have already struggled for years now.

So far this year, retailers have closed more than 7,000 stores, which already surpasses the full-year totals of all past years, according to accounting and consulting firm BDO. As of mid-August, store closures have outpaced openings, according to Coresight Research. And more are on the way. Since Coresight made that count, Avenue Stores opted to liquidate, as did discount and drugstore retailer Fred’s and apparel retailer A’gaci.

Retail liquidations, which BDO notes accelerated this year compared to 2018, have contributed to a sizable chunk of those closures. Payless alone closed more than 2,300 stores in bankruptcy this year, the largest retail liquidation ever by store count. The liquidations of Gymboree, Shopko, Charlotte Russe and Ascena’s Dressbarn contributed hundreds each, but so did relatively stable retailers like Family Dollar, Gap, Walgreens and H&M.

With shifts to e-commerce driving much of the closures, the B. Riley analysts, led by Susan Anderson, wrote that retailers with a “well-developed e-commerce channel can help mitigate store base disruption.” They listed a handful of players they think have “both effectively managed their store fleet and developed a strong e-comm channel.” Those retailers include Children’s Place, Carter’s, American Eagle Outfitters, Foot Locker, Guess and Chico’s.

Meanwhile, many retailers are trying to put out financial fires as debt-servicing and lease costs run up against falling sales trends. Those retailers may well be forced to close more stores, possibly in bankruptcy.

Forever 21 grew aggressively after its creation in 1984 by Korean immigrants to the USA, and made $4.4 billion in revenue at its peak just four years ago, also expects to close many of its stores in Europe and Asia.

News and analysis service Debtwire reported earlier in September that Forever 21 was working with claims agent Prime Clerk in preparation of a bankruptcy and was in talks with lenders about debtor-in-possession financing.